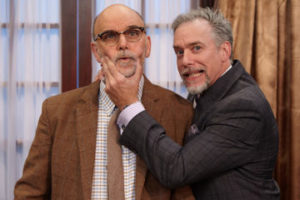 Written in the period straddling our most recent presidents, “The Outsider” has plenty that smacks of familiar debacles. But the parallels presented by actor/playwright Paul Slade Smith aren’t direct. You can put names on what you see (Sarah Palin, anyone?), or you can just enjoy the wacky setups and marvel at how close they are, no matter how farcical, to the real deal.

In this West coast premiere, it’s not only the politicians that are mindless or soulless. Their handlers are even worse, scheming to demonstrate that people don’t really want knowledgeable or qualified leaders. And we’ve all heard that conversation a time or two of late.

Regular folks, we’re told, love an outsider, not a jaded professional politician, but someone who seems just like them — which often means just as ignorant.

So, we have a new governor of a small state, who was Lt. Governor until just a few days ago, after the Governor was ousted for having an affair with a beauty contest runner-up — not even the winner!

The high-level consultant wants the Guv to pretend that he’s incompetent and ill-informed, even though he’s a total policy wonk. He’s terrific with numbers, but can’t deal with people, let alone TV cameras.

To boost him up and avoid a recall, the consultant and the pollster are picking as his Lt. Governor a thoroughly moronic secretarial temp, and coaching her to continue to spew senseless platitudes with zero content.

The pollster reports that the people love her, because she has the one most valued characteristic for electability: She’s real.

David Ellenstein directs a crack comic ensemble with pacing and timing to die for. Their rib-tickling expertise combines flawlessly with the madcap script and pitch-perfect design work.

At a time when we’re all drowning in political theater of the frighteningly real sort, “The Outsider” is helpfully tossing us a dizzy and diverting life preserver.