“A CHORUS LINE” at the Welk Resort Theatre 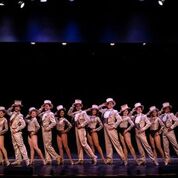 Nothing has changed in the 45 years since “A Chorus Line” debuted in 1975.

Based on gifted director/co-choreographer Michael Bennett’s interviews with real Broadway ensemble dancer/singers, the show is perhaps the most genuine, heartfelt, gut-wrenching portrayal of what it’s like to be a Broadway ‘gypsy’ — schlepping from audition to audition, show to show, maintaining optimism in the face of rejection, insecurity and ever-dwindling finances.

By showing us one grueling, day-long audition and elimination, and by spotlighting particular performers, “A Chorus Line” zeroes in on the individuals that make up the indistinguishable array of legs, arms, hats and kicks.

The timeless musical reveals how dancers worry about their age, and how long their bodies can keep up the pace. Thirty is old in this crowd, and the director pushes them to think about what on earth they can do when they can’t do what they love any more, even if their passion is often demeaning and dispiriting.

Despite its ebullience and expansive humor, the harsh realities of “A Chorus Line” will break your heart. It’s no wonder the show won nine Tony Awards and a Pulitzer Prize for Drama.

There was brilliance in its creation at every level: Marvin Hamlisch’s wonderful score, Edward Kleban’s clever and moving lyrics, and James Kirkwood and Nicholas Dante’s seamless storyline.

At the Welk Resort Theatre, director/choreographer Hector Guerrero, who did a tremendous job with “West Side Story” last year at Moonlight Stage Productions, is re-creating the iconic Michael Bennett choreography, with a 25-member cast of true triple threats — who dance, sing and act superbly.

The stunning uniformity of the group choreography is offset by the poignant solo numbers, about difficult childhoods saved by escaping to dance, with standout performances by Lauren Louis, Mikayla Agrella, Natalie Nucci, Jeffrey Scott Parsons, Donny Gersonde and Holly Echsner.

The precise dance moves are enhanced by the lighting, sound and costume design. But unfortunately, there is only pre-recorded music; the Welk had live music in the pit for decades.

It’s the show itself that works its magic and brings me to tears every time. The passion is palpable, the emotions and anxieties are real.

If you care about theater, and what it takes to make it happen, this is a production you absolutely won’t want to miss.