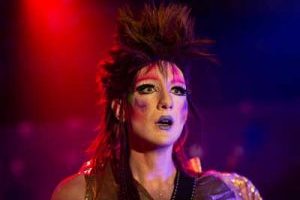 Printed and posted at the San Diego Jewish Journal 12/19

Language is a living, breathing thing. It evolves to encompass new inventions, concepts and thinking. And how we talk about gender has certainly been evolving. So, before we start exploring the exciting new season coming up at Diversionary Theatre, the nation’s third oldest continuously producing LGBTQ theater, let’s lay down a few definitions, so we’re all on the same page.

It’s all about gender identity and gender diversity.

People are assigned a gender at birth (“It’s a girl”!) but that doesn’t necessarily become the gender they identify with. When you do, that’s your cisgender. When you don’t, there’s a range of alternatives.

‘Gender non-conforming’ or ‘non-binary’ or ‘genderqueer’ are umbrella terms people use when their gender doesn’t fit squarely into male or female categories. This can include those who feel their gender is a mix of both, changes often, is something totally separate, or they have no strong sense of a gender at all.

‘Transgender’ or ‘gender diverse’ (trans for short) includes people who don’t exclusively identify as the gender they were assigned at birth.

Gender and sexuality are two different things. Trans people can be bisexual, asexual, straight, gay, or any other sexuality. They may or may not take steps to socially or physically align with their gender identity. It’s not about appealing to other people, or trying to look like a cisgender person, but rather, doing what feels right for themselves, and what that means for each person is different. It’s also a gradual thing, and people might change their mind about what works best for them.

‘Socially transitioning’ involves how trans people interact with others. For example, it may involve coming out as transgender, asking people to use different pronouns to describe them, or changing the way they interact with gendered spaces, such as the bathroom they use.

‘Physical transitioning’ usually involves altering appearance to fit what feels right, which might entail clothes, makeup and hair, or seeking medical treatment like hormones or surgery.

Since the trans community is a marginalized and often maligned segment of the population, and one typically not accurately represented in the media and the arts, Diversionary Theatre artistic director Matt Morrow thought it was high time his company focused on the trans and non-gender-conforming community.

“Especially in view of the president’s taking a standing against the trans community,” Morrow said, “politically speaking, the time was right. We needed to do a little bit more to make the trans community feel welcome, appreciated and understood.”

The final three productions in Diversionary’s 34th season comprise the Gender Series: the first two plays have trans characters, and in the third, a character discovers they’re genderqueer. (When in doubt, pronominally speaking, suggests Matt, use ‘they.’ It’s the safe way to go. These days, people will often tell you what pronouns they prefer).

A New Year, A New Play

First up (February 6-March 8) is a world premiere, “A Kind of Weather,” by Sylvan Oswald, a trans interdisciplinary artist based in Los Angeles. A recipient of multiple awards, most recently, a 2019 Guggenheim Fellowship in Drama and Performance Art, he works on the intersection of theater and live art and is interested in new approaches to playwriting. Currently an assistant professor of LGBTQ Studies at UCLA, Sylvan has also taught at Barnard, Mt. Holyoke and Princeton.

Matt considers “A Kind of Weather” to be “a beautiful, funny, surprising new play. I’ve been following Sylvan for 15 years. This piece is really adventurous. I’ve never seen anything like it. It uses a familiar father-son trope. The son identifies as trans, but that’s not what the story is about.

“It’s about the relationship between a father and son, how they grow, and grow apart, and try to come together. The nature of their conflict is the loss of the mother, right after the parents split. It’s non-linear; it time-jumps. It explores the effects of gender identity on family. It gives a diversity of points of view. There are new characters you’ve never encountered before. At one point, it goes off the rails a little and turns into a musical. It’s really fresh.”

As Sylvan puts it, “the play isn’t about a trans character’s transition—he is actively resisting that narrative. Instead, we meet him after that, in his life and his deeply felt relationships. And really, it’s more about his father than it is about him! The play gently suggests that it’s time to move on to the actual substance of trans lives. The title comes from a description of the work of the late experimental writer Kathy Acker. The poet Robert Glück writes that in her work, “sex is a kind of weather.” Which I have adopted to describe both the sensual content of actual weather and also the atmospheric qualities of desire.”

To direct this experimental piece, Matt has chosen Bea Basso, former Director of New Works at the American Conservatory Theatre in San Francisco, now based in San Diego.

“She’s incredibly talented and insightful,” he says, “and has a great eye for dramaturgy.”

“I’m thrilled to be working at Diversionary,” says Sylvan. “From my first visit, I could tell that Matt had created an atmosphere of care, consideration, and artistic integrity. He’s 1000% invested in the mission, and it’s contagious.”

“Plot Points in Our Sexual Development” is billed as “a contemporary queer love story, exploring the intersection of gender and intimacy, and the dangers of revealing yourself to the person you love.”

“Structurally,” says Matt, “it’s two people telling their own stories about growing up and finding their sexuality. Then we realize they’re telling each other. Then it becomes confrontational. They’re navigating how to deal with each other emotionally, psychologically and sexually. It’s somewhat explicit, probably PG-15. But, it’s an eye-opening story, about a cisgender woman and a trans-masculine man. I learned a lot by reading it myself.

“It’s about how intimacy and sexual intimacy can affect the larger relationship. How we encounter, please and satisfy each other sexually can connect or distort our identity.”

The playwright, Miranda Rose Hall, penned the marvelous “The Hour of Great Mercy,” that had its world premiere earlier this year at Diversionary. She says:

“I wrote ‘Plot Points’ because I challenged myself to talk about the last thing I would ever want to discuss in public—which turned out to be queer sexual development! Formally, I was very interested to explore acting’s most essential elements: talking and listening. So the play became an experiment in vulnerability and intimacy, and a portrait of a couple who are struggling to see, hear and understand one another.

“It was also really important to me to reflect the gender dynamics of my own relationship,” she continues. “At the time that I wrote it, I had never seen a play (not that they don’t exist) about the specific dynamics that arise between a queer cis-woman and a transmasculine genderqueer person. It felt like a missing piece of myself that I hadn’t seen in the American theater. I am so thrilled that this play has a home at Diversionary, which has been such a loving and generous artistic home to me.”

New York Magazine, felt that the play “enlarges our sense of shared humanity.” The New York Times found the play “important and intensely provocative. Transgender people deserve to see joy onstage, and others can share the feelings.” The stories about body image and gender expression are universal, the Times continued, and the conversations are ”deeply, almost shockingly frank, and deeply revelatory for everyone who has tried to figure out themselves, their bodies, their feelings.”

As Matt puts it, “There is simply nothing more queer, unique or authentic than ‘Plot Points’ on the American stage today.” Kym Pappas, co founder/co-artistic director of InnerMission Productions, directs.

Head over heels for “Head Over Heels”

Okay, how crazy does this sound? A 16th century prose romance, written by an English courtier and poet, has become a musical set to the songs of the all-female new wave ‘80s rock band, the Go-Gos.

The jukebox musical “Head Over Heels” was equally iconoclastic for its time, with an original book by Jeff Whitty, the visionary behind “Avenue Q.” The book was then adapted by James Magruder (who adapted “Triumph of Love,” the play and the musical).

The show had its world premiere in 2015, and opened on Broadway in 2018, running for five months.

In the mythical land of Arcadia, the royal family must save their beloved kingdom from extinction. Over the course of their adventurous journey, gender roles are upended, relationships are liberated and love is discovered in surprising ways. It’s a jukebox musical and Elizabethan farce, with gender-bending and non-binary themes.

Matt Morrow thinks it’s “a joyous celebration of where we are right now. A big turning point, celebrating a new beginning, something being birthed. A new higher level of understanding and compassion.

“There’s no way to save this kingdom. They have to burn it down and start it over. It sounds dire, but… it’s the music of the Go-go’s!”

That includes songs like the title tune, as well as “We Got the Beat,” “Our Lips are Sealed,” “Heaven is a Place on Earth,” “Mad About You,” and many more.

“It’s an intelligent musical,” says Matt, who will direct. “The songs are interwoven so well, it sounds like they were just waiting for this smart show that brings joy to a lot of difficult conversations.”

Jeremy Wilson, who is himself gender non-conforming, was magnificent as the title character in “Hedwig and the Angry Inch” at Diversionary this past spring. He plays the non-binary snake-oracle Pithio, who sets everything in motion.

“This is an ensemble show,” says Matt,” who has cast ten wonderful actors, “all of whom can understand and be comfortable with classic verse. There will also be a 5-piece rock band, under the musical direction of Patrick Marion, with choreography by Katie Banville.

“One of the reasons we’re doing these three pieces side by side is to facilitate the conversation around gender. I know there’s confusion in the mainstream around gender identity. And we’re hoping to help through theater.

“We like to say at Diversionary: We are for everyone. Everything we do is supremely accessible. If you don’t identify as LGBT, come with an open heart and an open mind. The stories we tell are emotionally moving and intellectually stimulating.”