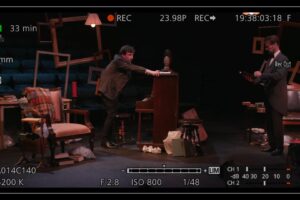 As the pandemic grinds on, and business openings have folks holding their breath and bracing for the next wave of infection, more and more theater companies nationwide are postponing their seasons to 2021.

Restricted to Zoom but frustrated by its boxy confinements, theatermakers are becoming more inventive.

Two San Diego theater companies have broken out of the box and created imaginative productions that maintain social distancing but move ever closer to simulating an actual (albeit onscreen) theatrical presentation.

Both productions had been scheduled for the regular season this spring but were jettisoned by the Shelter-in-place orders. The plays were already cast, and at least partly rehearsed. To fulfill —commitments — and the theatrical void — the companies devised new ways to make theater magic.

In its West coast premiere of Eric Pfeffinger’s “Human Error” (two years after its initial Denver opening), North Coast Repertory Theatre maintained the basic character of Zoom, but pushed the boundaries and eliminated the squares.

Working with realistic backgrounds (not the unreliable Zoom type), they used a kind of fuzzy cameo shape for the performers, which gave a somewhat odd but more realistic sense of people actually sharing a space. The performances were then shot as a video and edited (by Christopher Williams and Aaron Rumley) so the whole became seamless, with no Zoomy juddering or buffering.

Under the astute direction of Jane Page, crossing the ‘margins’ became more feasible — so the players could “seem” to hand items over or even believably punch another character in the face.

The cast of five is excellent, with skillful comic actors in top form.

The setup seems more predictable (a one-joke sketch) than it turns out to be.

Two couples from widely disparate social-political-sports leanings are thrown together unexpectedly thanks to a fertility clinic mixup (a mis-planted embryo)..

The “rednecks,” diehard fans of the home team Ohio State, are earthy but wealthy. The NPR-liberals live in their own smug, self-righteous (less affluent) bubble. If forced to choose a football team to support, they root for the Buckeyes’ long-term arch-rival, Michigan — another (serious, to the conservatives) source of dissimilarity.

We also get comic takes on their contrasting views on abortion and religion (Christians vs. Buddhist-leaning atheists), yoga and parenting (the liberals are clueless first-timers; the conservatives have three kids already). The bumbling fertility doctor (scene-stealing Martin Kildare) adds another layer to the mix.

As the couples spend more time together (9 months plus), their judgmental first impressions are altered. And that’s the whole point of the piece. A vital message for our divisive times, though the play falters in the second act:  too silly at some moments, too didactic and preachy at others.

Not all the characters are equally well defined. The humorless researcher (Terrell Donnell Sledge) who writes dry, esoteric papers on the intricacies of comedy, remains a cypher.

Allison Spratt Pearce, Jacque Wilke and Max Macke bring high levels of humor to the other roles, and carry us along on their wacky journey.

The visual/technical conceit takes a little getting used to, but it’s a giant step up from Zoom readings.

Meanwhile, Backyard Renaissance Theatre Company has taken a giant step beyond, actually making use of a genuine theater space (Tenth Avenue Arts Center, downtown), and filming their socially-distanced production of “The Dazzle” with multiple cameras (thanks to Stand Up 8 Productions, with the blessing of Dramatists Play Service and the playwright, Richard Greenberg). The footage was later edited into a cohesive performance piece.

Narrative info provided onscreen at the outset makes it clear that rehearsals took place via Zoom and that designers were provided with solo shifts, to maintain a safe creative space for each of them.

Art designer Tony Cucuzzella built three separate sets a minimum of nine feet apart. The editing made it feel that the actors were all in the same room. The play calls for minimal physical contact among the players, and those moments were extremely well done.

Under Rosina Reynolds’ taut, expert direction, the flow is smooth, the characters well etched and the marvelous language proficiently handled.

This is a shocking story, shockingly based in fact, about the highly eccentric and mentally unstable Collyer brothers, who lived in a Harlem brownstone, maintaining total seclusion for decades. They even booby-trapped the entrances to bar intruders. The compulsive hoarders were found dead in 1947 (at age 62 and 66); they were practically buried under 140 tons of detritus.

When Greenberg wrote his fascinating, award-winning, consummately literate play in 2002, he admitted to knowing “almost nothing” about the Collyer brothers. But he created a doozy of a backstory for them.

Fact: Both were educated at Columbia University. Homer earned a degree in admiralty law. Langley,  who had studied chemistry and engineering (hence, the effective booby traps), was also an accomplished concert pianist who had played Carnegie Hall. Greenberg’s Langley is decidedly on the autism spectrum, with many obsessions, sensitivities and paranoias,and extreme social incapability. In life and in the drama, the brothers are symbiotic and co-dependent.

Greenberg adds a love interest, a rebellious socialite who was intrigued by the Collyers’ bizarre, unconventional lifestyle.

The trio couldn’t be better inhabited than by Jessica John, Fran Gercke (Homer) and Tom Zohar (Langley). Each crafts an aptly atypical and original character. Their interactions are riveting.

Overall, “The Dazzle” is a mesmerizing experience, both technically and dramatically.