“FLY” at the La Jolla Playhouse 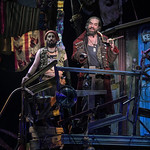 Certain stories from childhood sink their hooks into you and never let go. They burrow deep and penetrate to the very marrow of your being.

J.M. Barrie’s “Peter and Wendy” is one of those stories. We never seem to get tired of revisiting the boy who won’t grow up, and the girl who knows that she must.

The La Jolla Playhouse has already presented two retellings of the tale: the thrilling Mabou Mines puppet version, “Peter and Wendy,” in 2002, and a Page to Stage launch of “Peter and the Starcatcher,” which went on to win five Tony Awards in 2012.

Now comes the much-revised musical, “FLY,” which debuted in 2013 at the Dallas Theatre Center. True to its name, it features fabulous flights of fancy and aerial hijinks.

This time, it’s Wendy’s story ­­–– a grrrl-power take on the tale, with book by Pulitzer Prize finalist Rajiv Joseph, lyrics by Joseph and Obie-winning playwright Kirsten Childs, and music by Tony, Emmy, and Grammy-winner Bill Sherman.

Adding to the musical’s high-end pedigree are a couple of “Hamilton” alums: producer-turned-director Jeffrey Sellers, and co-choreographers Andy Blankenbuehler and Stephanie Klemons. The costumes, staging and dancing are magnificent. The lighting is gorgeous.

And the cast is delightful. Storm Lever, last seen here as young Donna in the musical, ”Summer,”  is agile and charismatic as Wendy, and Isabelle McCalla is adorable and graceful as Tink. Even the dreaded Crocodile, played by Liisi LaFontaine, is female.

But the show is nearly stolen by former local Eric Anderson, who is hilarious – and poignant – as Hook, a menacing baby who just wants his blankie and a Mommy, though his definition of motherhood is decidedly un-feminist.

The first act is magical, but things get a bit murky and maudlin in Act Two. The sound and miking remain surprisingly indistinct throughout.

But this primordial Neverland –– pulsing, rhythmic, African-inspired — has much to teach — about courage, choosing your own path and taking care of yourself.

Most important, perhaps, the story reminds us that, though we have to grow up, which is an adventure in itself, we should never let go of our sense of wonder and imagination.