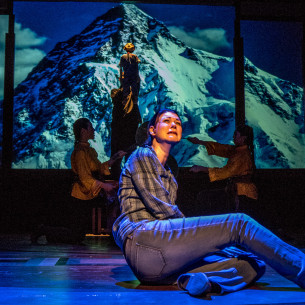 How – and when – does a mother let go? Do most people turn to religion only when it’s convenient? What about if you’re not quite sure which religion you’re following?

These are among the many questions posed in Sarah Ruhl’s 2014 spiritual drama, “The Oldest Boy.”

Mother, a nameless American woman, baptized as Catholic but trying to follow the Buddhist path, is happily married to a Tibetan man. One day, two Buddhist monks appear at their door, claiming that the couple’s 3 year old son is the reincarnation of a high lama. They want to bring him to a monastery in India, so he can be trained to take his rightful place as a teacher and leader.

How does a couple trying to adhere to the principles of Attachment Parenting also respect the inherent non-attachment of Buddhism? It’s a struggle between family and faith, West and East.

Ruhl, the most produced female playwright in America, always has an element of myth, fantasy or magical thinking in her work. Beyond the beautiful Buddhist music and ritual, her story is grounded in an alarming reality. Tibetans believe that a child who is not allowed to follow his designated reincarnation will actually become seriously ill.

The costumes are stunning, the dance sequences elegant, the soundscape evocative. The young boy is delightfully portrayed by a Bunraku puppet and voiced by a graduate of the Tibetan School of Performing Arts.

At the center, Amanda Sitton is wondrous as the woman who has to fall in love, fall apart, give birth, question her beliefs and loyalties, and bow deferentially to her son. Her impressive emotional range is bolstered by Napoleon Tavale as her steadfast husband.

This slight but pleasant piece pales in comparison to some of Ruhl’s earlier plays. But there are always lyrical lines and words of wisdom in her work. And the places her imagination takes her – and us – are always enlightening.

“The Oldest Boy” runs through December 6 at the San Diego Repertory Theatre in Horton Plaza.