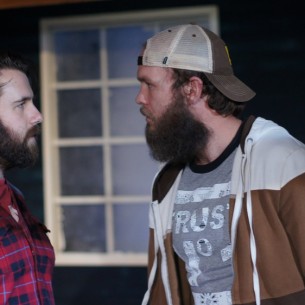 Thirty year-old slackers with no ambition or direction are not inherently the stuff of high drama. But in the hands of imaginative, award-winning playwright Annie Baker, who typically favors character over plot, they can be subtle case studies.

Take KJ and Jasper, for example. One’s a college dropout; the other merely a high school grad. The dropout still lives with his mom. They used to be in a band, but they couldn’t settle on a name. The Nefarious Hookahs and The Aliens were two contenders.

In choosing a title for her 2010, Obie Award-winning play, Baker went for “The Aliens.” These Vermont misfits may not be from outer space but, convinced they’re geniuses, they employ various substances to catapult them to another plane. KJ writes and sings tuneless songs with sci-fi, mathematically-tinged non-sequitur lyrics, like “Time machines were made for me,” or “I am a sensei!”

Jasper, who clumsily strums a guitar, is writing a novel, part bodice-ripper, part road trip. KJ talks about moving out from his mother’s house. He has a list of possible destinations, from a wind farm, to Winnipeg, though he’s not really sure where that is.

This contemporary version of Beckett’s Didi and Gogo spend most of their time in the employees-only, litter-strewn backyard of a coffee house they never enter. But they do meet the newest employee, 17 year-old, stoop-shouldered, friendless nebbish, Evan. They take him under their wing, in a way, if that includes forcing him to drink mushroom-laced tea. It’s not clear whether they’re trying to help him become more cool (his favorite word), or keep him from ratting them out and getting ejected from their hangout. In a sense, Evan blossoms. Other changes are more – and less – predictable in this two-hour exploration of Generation Y torpor and squishy morality.

A terrific cast is expertly co-directed by ion theatre’s Glenn Paris and Claudio Raygoza. The play’s endless pauses, unlike a Pinter play, do not seem to be pregnant with meaning; nothing much is birthed here. But the set and sound design perfectly support this desultory contemplation of friendship, love and loss.

“The Aliens” runs through December 12 at ion theatre, on the edge of Hillcrest.