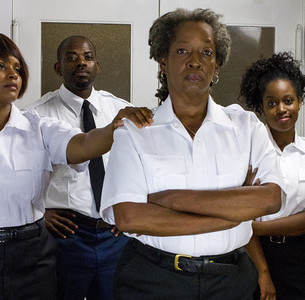 New York-based playwright Cassandra Medley has a lot on her mind – too much for one play, in fact.

Her world premiere, “Cell,” set in an immigration detention center, has ‘topicality’ written all over it. It shines a piercing light on a badly broken system, the abuse of already vulnerable people, and the desperation of bottom-rung job-holders who have to deal with them, while they do and say just about anything to remain employed. How far does one go, how much can go unsaid, or unreported, to keep a job – or to maintain some sense of one’s own humanity? Just how bad is the violence and corruption in these prisons for illegal immigrants? How are their children treated? And how much of a role do race and class play in the employment hierarchy?

Worthy questions all, and formidable fodder for a new play. But Medley doesn’t stop there. Her intense if messy drama is also about family.

A desperate, homeless, formerly alcoholic woman (Monique Gaffney) and her 23 year-old daughter (Andréa Agosto) have come to crash with the mother’s estranged sister, Rene (Sylvia M’Lafi Thompson). Now, they’re all crowded into a trailer, all working at the same detention center, where Rene has been toiling calmly for decades. She was able to snag low-level jobs for them, and they’re grateful, but roiling family issues soon seep through, swirling around guilt, dependence, resentment and responsibility.

Then there’s Leon (Vimel Sephus), Rene’s supervisor. He’s also African American, and has an eye for young Gwen (Andréa Agosto), even though she’s a dozen years his junior. He and Rene are go-along-to-get-along employees. They turn a blind eye to some awful doings, though wide-eyed Gwen chafes at the casual inhumanity in the center.

But wait, there’s more: dream, drunk and psychotic-stupor sequences abound in the second act, punctuated by silhouetted characters dancing (huh?). There’s a repeated intimation that Gwen is ‘not quite right,’ though there’s no behavioral evidence of that; in fact, she’s the most ‘right-minded’ one of all, the only one, she angrily tells them, who has a conscience. She is, actually, the only one who’s aware when she’s losing her humanity and compassion in the line of rule-governed, boot-salute duty.

Piled atop all this, there are issues of faith, of generational conflict, of being taken –  or taken in. Of complicity. Of compromise. Though no questions raised about a supposedly upright supervisor blithely shacking up with a subordinate.

So many topics, so many strands (not all of them satisfyingly tied up at the end).

There’s a robust, gut-wrenching play in there; maybe more than one. What this “Cell” need is mitosis (and a ruthless rewrite).

It all begins well enough, with naturalistic (if choppy) short-scene sequences, introducing the characters and the workplace. This first act lasts only 30 minutes. Perhaps its repetitive dialogue represents the mind-numbing monotony of the job. Perhaps not.

Then the hour-long second act begins, much less on-the-nose thematically. It takes some weird turns, including into the minds of characters, with an enigmatic, extreme-closeup portrait repeatedly projected overhead. All hell breaks loose at work — and in the family. The resolutions happen at breakneck speed, crashing into each other near the end, going so fast we miss the details of some crucial elements (like the insurance/liability/legality particulars).

Speed is an issue throughout. The short, jerky scenes interrupt the flow of the unfolding story, and rapid speaking rates, coupled with the cavernous ceilings in the 10th Avenue space, swallow many lines.

Part of the problem is the neck-snapping tonal shift from the first act to the second. Medley originally wrote the piece as a one-act, leaving the characters’ life-choices up in the air. Then she decided to tack on another act, but the two don’t quite mesh.

Still, Fort has marshaled an excellent cast, centered by the amazing Thompson, whose character, Rene, takes the most significant emotional journey of the four (both Gwen and Leon are under-written), though each walks through some level of fire and self-awareness.

Gaffney is highly effective as the one who starts and ends desperate, trying to please everyone and winding up with next to nothing. Sephus and Agosto display strong acting in their crises of conscience.

The play leaves us feeling completely wrung out at the end, but not necessarily for the intended reasons.