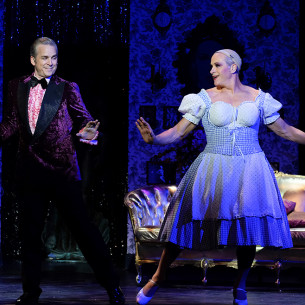 “We Are What We Are” is pretty much the theme song of “La Cage aux Folles,” the 1983 Tony Award-winning Jerry Herman/Harvey Fierstein musical (based on a French farce of the same name, and an inspiration for the Robin Williams/Nathan Lane movie, “The Birdcage”), all about acceptance of others, set in a St. Tropez drag cabaret club. The show is also a valentine to a long-time, loving gay relationship, and a reminder to Carpe Diem (“The Best of Times is now”).

San Diego Musical Theatre is presenting a splendid production, excellently sung and gorgeously costumed (rented but uncredited). Those lovely, lewd La Cagelles ‘girls’ sure can do high kicks and splits (though their lifts are a tad on the awkward/clumsy side at times).

Director Larry Raben and choreographer Karl Warden make excellent use of the Spreckels Theatre stage, creating an ‘apron’ out front, which allows the performers to go out into the house and interact with the cabaret ‘patrons’ (i.e., audience), and even bring some of them up to join the festivities.

Distinguished Robert Townsend is our charming host as Georges, who owns and runs La Cage, an exotic, eccentric place (where you might “meet your mistress and your boyfriend and your wife”). On a regular basis, he tries to wrestle his resident diva, Albin (AKA the nightly star, Zaza), wonderfully portrayed by David Engel (who may be a tad brawny for a drag queen, but he makes it work). Both are consummate pros, with marvelous voices (quite a transition for Engel from his last local role: Harold Hill in “The Music Man” at Moonlight Stage Productions; and for Townsend, who just became a Dad). The two bring a comfortable tenderness to their sometimes-fraught but always loving relationship.

As Albin’s butler/maid, beloved, sought-after director/choreographer James Vásquez makes a most welcome return to the stage. He’s absolutely hilarious, in his multiple wigs, accents and getups – and he nearly steals the show.

Debra Wanger does a nice turn as the wife of the uptight, homophobic politician, father of the fiancée of Georges’ son.

That fateful dual-family meetup and its aftermath take the show in an entirely silly and implausible direction, but this new version of the script is tighter and more compact, and the second act speeds to a singalong conclusion (“The Best of Times”).

Plenty of feathers and glam here, but a whole lot of heart – and a message, too (Are you listening, Kim Davis of Kentucky?).

So leave your inhibitions behind, and slink into “La Cage aux Folles”, where the ‘birds’ are unfettered and free.