“THE (CURIOUS CASE OF THE) WATSON INTELLIGENCE” – Moxie Theatre 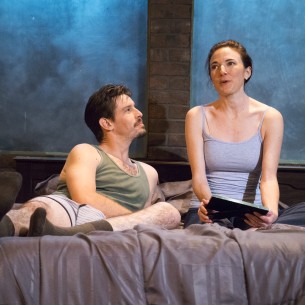 Not so elementary, this Watson.

Madeleine George’s comic drama, “The (curious case of the) Watson Intelligence,” is a complex, overlapping, time-hopping contemplation of relationship and communication: real vs. fictional and human vs. technological. It’s all about control and submission, holding on and letting go; seeking perfection and learning to accept something less.

The play was a finalist for the Pulitzer Prize in 2014. George, whose equally thought-provoking creation, “Precious Little,” is winding up an excellent staging by InnerMission Productions, tells both tales of communicative breakdown in fascinating, fragmented ways.

Here, she gives us a welter of Watsons: the IBM supercomputer that beat two “Jeopardy” trivia champs on TV in 2011 is the inspiration for Watson, the empathic android created by Eliza, an artificial intelligence expert who worked on the original Watson. And there’s Josh Watson, a tech nerd sent by Eliza’s paranoid ex-husband to spy on her, but instead, they fall into bed, and maybe in love. There’s the assistant to Alexander Graham Bell, Thomas Watson, who famously answered the first-ever phonecall in 1876. On the 55th anniversary of that event, Watson is being interviewed on radio by a producer named Eliza. And in Victorian England, there’s another Eliza, who seeks the help of Sherlock Holmes, and instead gets a consultation with the elemental Dr. Watson.

It’s ingenious how George weaves it all together, history repeating itself in the brilliant or mad inventions of scientists attempting to improve society and communication,  but in fact, keeping us from gritty, flawed, real human relationships.

Under Delicia Turner Sonnenberg’s precise and cunning direction, a stellar cast of three plays all the roles. Jo Anne Glover, marvelous as the anguished Elizas; Eddie Yaroch, a zany hothead as the Merricks; and Justin Lang, brilliantly malleable as the various Watsons.

The excellent design work includes a clever revolving set and wonderful quick-change costumes. Madeleine George poses questions that defy easy answers. But the next time you interact with Siri, you might give this play a second thought.

“The (curious case of the) Watson Intelligence” runs through December 6 at Moxie Theatre in the Rolando area near SDSU.