“THE NORTH PLAN” at ion theatre 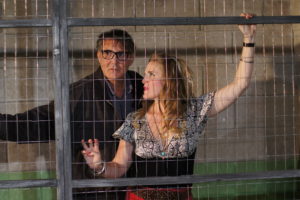 There’s a contestable government in Washington. The country is roiling with checkpoints, crackdowns, arrests without warrants, and wanton incarceration and interrogation. A revolution is brewing.

The darkly comic political thriller, “The North Plan,” by Chicago-based playwright/actor Jason Well, premiered in 2012…. but it was eerily prescient.

The drama is two parts Quentin Tarantino and one part Inspector Clouseau. The dramatic tension escalates, and violence is imminent. But there’s also a lot of comic relief – a bumbling sheriff, two Homeland Security thugs, and farcical cases of mistaken identity

It all happens in the tiny fictional town of Lotus, Missouri. There’s only one holding cell, and pretty soon, it has two combative inhabitants.

We first meet Tanya Shepke, a foul-mouthed single mother of questionable morality who’s in the tank for a DUI. After she relentlessly runs off at the mouth, Carlton Berg gets thrown in, a State Dept. employee who possesses a crucial database of the resistance that, in the right hands, could save many lives.

His cast is superb, from terrific Samantha Ginn, with her hyperverbal fusillade of nonstop F-bombs, to Daren Scott’s wonderfully edgy, neurotic revolutionary. The three law enforcement agents are excellent, spanning a range from paranoid to ambivalent to downright scary.

The set, lighting and costumes are spot-on, and the soundtrack, thanks to Tanya’s zany partialities, is Lynyrd Skynyrd, who she thinks should grace the face of the country’s new money.

By the end, the nation may or may not have been saved, but, without any changes to the text, the current state of the Union will be invoked, Presidential pardons included.

So what’s the message here? Perhaps, when everything you care about is all but lost, at least you can laugh.