“AN AMERICAN IN PARIS” at the Civic Theatre 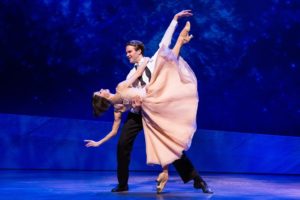 Inspired choreography, phenomenal dancing, an intriguing story, a terrific ensemble, stunning scenery, a full orchestra and (Bonus!) — the music of George and Ira Gershwin. To borrow a phrase from one of their beloved classics: Who could ask for anything more?

The first national tour of the acclaimed dance musical of 2015, which won four Tony Awards, “An American in Paris,” just took a flying leap into the Civic Theatre, for a five-day run.

And a superlative production it is. The ingenious, eye-popping scenic design (by four-time Tony winner Bob Crowley, who also designed the gorgeous costumes) is alone worth the price of admission. A brilliant use of projections (designed by 59 Productions), makes each background seem to be drawing itself with an unseen hand. When the image coalesces, gets colored in, and begins to look three-dimensional, reflective movable panels are added to the mix, and sheer theater magic ensues.

The romantic story (book by Craig Lucas), was inspired by the 1951 Academy Award-winning film starring Gene Kelly and a still-adolescent Leslie Caron, is set just after World War II. Soldiers, including Lieutenant Jerry Mulligan (McGee Maddox), are returning and life is beginning to return to the City of Light. But a dark undercurrent remains, given the government’s acquiescence to the Nazi occupation.

Mulligan, a nascent artist, conveniently misses his train and decides to stay in Paris. He gets a room in the same boarding house as snarky fellow American, Adam Hochberg (Stephen Brower), an up-and-coming composer. Adam has been befriended by Henri Baurel (Nick Spangler), product of a snooty, upper-crust family, but dying to become a song-and-dance man.

The friends dub themselves The Three Musketeers, and after some time, they realize that they’re all in love with the same woman: the beautiful, elusive and enigmatic Lise Dassin (Sara Esty), a budding ballerina.

There are more characters and coincidences, but though the musical fleshes out the film story, this show’s not really about plot and dialogue. It’s all about the dance.

Half the cast comes from a musical theater background, and the other half from the ballet world, including the two stellar leads (Maddox has danced with the National Ballet of Canada, and Esty with the Miami City Ballet). He’s an incredibly agile and athletic dancer, with marvelous leaps – and he has an easy onstage acting manner, and one of the more appealing singing voices in the cast.

Esty is a tiny slip of a thing, apparently weightless, with the gamine look of Audrey Hepburn or Audrey Tautou (“Amélie”). Her work on pointe is sublime. As a dancing couple, they’re better in the jazzier styles; he seems less connected to her in the second act showcase ballet duet.

But overall, they’re wonderful together, both thoroughly irresistible. The corps is fantastic; the whole first act is almost entirely dance – and it’s breathtaking. The synchrony is outstanding throughout, but especially in the Radio City Musical Hall fantasy scene (the requisite tap number for seemingly every musical).

The second act changes the tone and pace (and gets a little bogged down in untying all the relationship and narrative knots). Hearty Hallelujahs and Huzzahs for the wildly imaginative direction and choreography go to Tony winner Christopher Wheeldon. And the score, of course, featuring, in addition to the dreamy title orchestral work, timeless Gershwin songs like “I Got Rhythm,” “I’ll Build a Stairway to Paradise” and “But Not For Me.”

Under the music direction/baton of David Andrews Rogers and with the arrangements of the gifted Rob Fisher, the13-piece orchestra is magnificent; big, brassy sounds alternate with aching sadness and nuance.

The secondary characters are played capably, if not memorably. Brower could be a lot funnier as Adam (but it’s pretty amusing when he gets to say, “Who do you think I am – Oscar Levant?’, a sly reference to the actor who played his role hilariously in the film).

The lighting (Natasha Katz) is superb, and except for some muffled dialogue, the sound (Jon Weston) is crisp – especially for the notoriously tricky Civic Theatre.

The production is so exciting, the music so marvelous, the dancing so spectacular, all I can say to recommend this show is, “S Wonderful.”