“PUMP UP THE VOLUME” at San Diego Musical Theatre 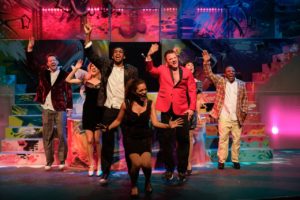 Oh, snap. The wacky 1990s and their GenX denizens are back.

It was a weird decade: not the most memorable in terms of sartorial or musical style.

This is the third decade-driven mashup musical San Diego has premiered. The first (created for Lamb’s layers Theatre by Kerry Meads and Vanda Eggington) was “Boomers,” focused on the ‘60s and ‘70s.

Next came “Mixtape,” the very popular ‘80s musical revue which was the first collaboration of Colleen Kollar Smith and Jon Lorenz, also at Lamb’s Players Theatre.

“Pump Up the Volume, A 90s Palooza” is another Lorenz/Kollar Smith production, this time under the banner of San Diego Musical Theatre.  Lorenz serves as music director, and Kollar Smith is the director and choreographer.

While the show is undoubtedly enjoyable and nostalgic for those who grew up in those years (and were enthusiastically singing along and waving their glowsticks on opening night), it’s kind of amazing how many one-hit wonders there were, marking the decade’s music. Or not.

Do you remember, for example, Chumbawamba, Right Said Fred, Semisonic or the Quad City DJs? Even the title tune came from an obscure source: M.A.R.R.S.

In a protracted 2½+ hours of clever mixes that included vogue, rave, swing, hip hop and grunge music, only a few songs can be said to have stood the test of time.

Surprisingly, they’re all power ballads that come from movies: “I Will Always Love You” (‘Titanic’), “My Heart Will Go On” (‘The Bodyguard’) and “Everything I Do I Do For You” (‘Robin Hood, Prince of Thieves’). Okay, maybe we can toss in Green Day’s “Good Riddance (Time of Your Life).”

The boy bands of the era were all the rage: Boyz II Men, New Edition, and those infamous lip-synchers, Milli Vanilli. Some bands went on to spawn solo superstars; Justin Timberlake started in *NSYNC, Beyoncé began as part of Destiny’s Child, and No Doubt spawned Gwen Stefani. Other lasting stars of the time: Britney Spears, Mariah Carey and Christina Aguilera who, like Justin Timberlake, Britney Spears and Ryan Gosling, got their start in the Mickey Mouse Club.

Speaking of spawning stars, we can’t forget “DJ Jazzy Jeff and the Fresh Prince,” which evolved into the TV show “The Fresh Prince of Bel Air,” which in turn gave us musical and movie superstar Will Smith.

And then there were the clothes of the ‘90s. Not our country’s finest fashion epoch, with its plaid shirt grunge, palazzo pants, baggy jeans with one pant-leg rolled up, and overalls with one strap down. Sheesh.

All this makes its way into San Diego Musical Theatre’s “Pump Up the Volume: A ‘90s Palooza,” whose setup is similar to the other Kollar Smith/Lorenz shows:  tracing the arc and trajectory of a generation, from their childhood TV-watching habits to their seminal teen years, high school graduation and beyond, with one last gasp of raves and paloozas before joining the workforce – and then lamenting being judged by the brands of their cars and clothes, and the contents of their wallets, as the occasional monologues have it.

The loosely structured piece begins and ends in the present, with selfies and chiming cellphones. Then, old-school headphones drop down from the flyspace, and the group is off on a journey back in time.

Punctuating all the excellent solos, duets, group numbers and superb singer imitations, there are fairly frequent pop-ups from the pit, standing mic in hand, from guitarist/singer Leo Correia. At first, I thought his songs were just “fill” to allow for costume changes. But then, he appeared again and again, when there didn’t seem to be a definitive reason. He seems to have more solo stage time than another San Diegan, Leonard Patton. And he even gets the last note, singing alone onstage after the finale and encore. Although his guitar-playing is noteworthy, his presence stops the momentum of the show. And with all his numbers, how come he gets no credit in the program?

When he’s in the pit, the 5-piece band is excellent, coasting easily from one musical genre to another. However, at the outset of opening night, the sound mix was really off. The band overpowered the singers and their mics, and you couldn’t understand a word anyone said or sang. By midway through the first act, the problem was fixed and the sound (Kevin Anthenill) was crisp.

The seven onstage cast members really knock themselves out. They are energetic, versatile, talented and engaging. The three women (Brielle Batino, Cassie B and Janaya Mahealani Jones) are really strong (and sexy); they rock the songs and the costumes (Janet Pitcher). The two Equity actors – Edred Utomi and James Royce Edwards – are terrific, in their vocals, moves and stage presence. There are times when it seems Utomi really steals the show. Joshua David Cavanaugh has his moments, too, as does Patton. Everyone gets a spotlighted opportunity to shine.

The set (Michael McKeon) is something of a mashup, too: brushstrokes of garish color on multiple levels, which serve as a cluttered background for projections of illustrative and archival images. The lighting (Christina Martin) is brassy but effective.

As one of the cast laments, the ’90s generation, unlike those before them, didn’t have a unifying war, tragedy or disaster, and that lack of cohesion shows up in the music.