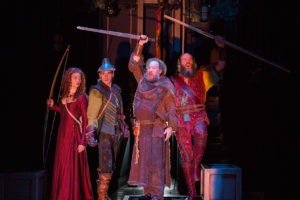 We could really use a Robin Hood right now. A charismatic leader dedicated to feeding the hungry, aiding the poor, and undermining the avarice of the wealthy. Even if he lived in a forest, I’d follow him.

In the style of his wildly popular Sherlock Holmes mystery, “Baskerville,” which broke attendance records at the Globe in 2015, this is a small-cast show with multiple, comical costume changes and characters, and boatloads of cleverness.

The comedy ranges from low to high, physical to linguistic; like the arrows in Robin’s quiver, the humor consistently hits the mark.

Despite all the wacky hijinks, the story remains remarkably close to the English legend, probably originating in medieval ballads that told of Robin of Loxley and his band of Merry Men.

In the 12th century, cruel Prince John has assumed the throne of his brother, Richard the Lionheart. Robin is doing his best to do good until Richard returns from the Crusades. He and his pals, including a stunning Maid Marion, a mandolin-playing Little John and a Falstaffian Friar Tuck, are desperately trying to save their country from abuse.

Of course, they have to thwart the villainous Sir Guy of Gisbourne and, at least in this version, the hilariously bumbling and cowardly Sheriff of Nottingham.

One funny running joke is that Prince John keeps spouting Shakespeare lines – 400 years before they were written. This, like the added character Doerwynn, a peasant girl who first rouses Robin’s conscience, is a crafty invention of the playwright.

This ingenious production, under the shrewd direction of Jessica Stone, involves the audience at times, and doesn’t scrimp on the requisite swordplay and romance. The marvelous, chameleon-like cast of eight keeps us delighted, amused and engaged.

Whether you relish swashbuckling adventure, amorous exploits, or good triumphing over evil, you’ll find what you’re looking for. And maybe you can envision a Robin Hood for our benighted times.