“THE EFFECT OF GAMMA RAYS ON MAN-IN-THE-MOON MARIGOLDS” 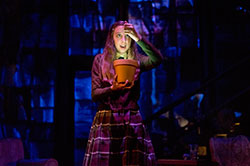 Tillie loves atoms. She savors the word. She loves the thought that some atoms in her body were at one time stars. This mousey preteen thinks Big.

Unfortunately, she’s trapped in a small, claustrophobic world, ruled over by her alcoholic, narcissistic, abusive, bipolar mother, who freely admits that she “hates the world.”

Beatrice, once had dreams, too. But she was, she claims, a victim of bad luck and poor choices. She married the wrong man, and before she knew it, she was alone, saddled with two kids. All her aspirations were demolished.

Tillie’s older sister, Ruth, a blossoming adolescent, crumbled under the strain. She had a mental breakdown. She alone tries to be nice to Tillie, but even she can’t sustain it. She gloats that Tillie is a source of ridicule at school – because she’s too smart, too introverted, too geekily dressed.

But Tillie has an escape hatch. When her mother allows her to go to school – which she often doesn’t – Tille is recognized by her teachers for her gifted, inquisitive mind. She’s especially been taken under the wing of her science teacher, who encourages her to enter the science fair.

Tillie embarks on a project of irradiating marigold seeds with gamma rays, the same rays that are emitted during a nuclear explosion (an everyday event in Tillie’s life). Extending the metaphor further, Tillie finds that some plants wither or die (read: Ruth) and some mutate in strange and beautiful ways (Tillie).

Unlike her smaller-minded competitors, Tillie wants her study to help humankind and be put to scientific use. Thwarted every step of the way, Tillie doggedly, quietly persists, and she makes it to the final round.

On the night of the awards, when the winner is to be announced, the nuclear eruption reaches its apogee at home. The damage is profound. The casualties include Tillie’s beloved pet rabbit, and the $50-a-week boarder her mother takes in to help make ends meet – the elderly, mute, walker-using Nanny, whom Beatrice jerks around like a rag doll. (Carm Greco, with her big, wounded eyes, is wonderful in this silent role – though even she has a moment when she seems to reach for the stars).

“The Effect of Gamma Rays on Man-in-the-Moon Marigolds,” a semi-autobiographical piece by former science teacher Paul Zindel, won the Pulitzer Prize in 1971. , though for some reason, it has become something of a footnote in American theater. It’s rarely produced (though there was a fine community theater production at Patio Playhouse five years ago).

To Cygnet Theatre associate artistic director Rob Lutfy, it’s a brilliant classic, right up there with the work of Arthur Miller or Tennessee Williams. He feels it deserves to be dusted off and given its due.

He has certainly given the play its due. And then some. At moments, his gritty-but-ethereal play is reminiscent of “The Glass Menagerie,” with a touch of “Death of a Salesman”: a rough, harsh reality peppered with moments of poetic language and dreamy longing. Toughness rubs up against fragility.

Lutfy is a potent director, and he has cast marvelously. Fourteen year-old Abby DePuy is terrific as the smart but stifled Tillie who, despite her stunted development and heinous homelife, manages to keep her head in the stars.

As Ruth, Rachel Esther Tate is superb, all girlish, envious and pubescent. Sadly, Ruth is probably irreparably damaged by the trauma of her environment. Her onstage seizure is heart-stopping.

At the center of this maelstrom is the magnificent DeAnna Driscoll, whose every performance is a wonder of natural, credible character depth, layers and nuance. She reveals the many colors of this complex mother, Beatrice, a harridan who can, at times, muster a faint and pathetic semblance of maternal care and near-affection, before she falls back into the resentment and self-pity she’s drowning in, taking her girls along with her.

The production overall is deep, intense and riveting, though the repeated twinkling and flashing of the onstage lights, however symbolic, become intrusive (lighting design by Conor Mulligan). The opening moments, when Tillie is speaking passionately about atoms and her larger, more lyrical concerns, her mother and sister (whom we’ve not yet met) twirl and dance around her, which also proves a distraction. But otherwise, the piece packs a wallop.

The set is a marvel of chaotic clutter (designed by Charles Murdock Lucas, with detailed properties by Rachel Hengst). The sound (Kevin Anthenill) is fine and the costumes (Shelly Williams) are just right, especially Beatrice’s beturbaned, Gloria Swanson getup to attend the school competition.

Quietly pursuing her studies and indulging her imagination, Tillie maintains a modicum of optimism, proving that even toxic poison won’t kill off a promising, hopeful new growth.