“THE MOUNTAINTOP” streaming from The Roustabouts 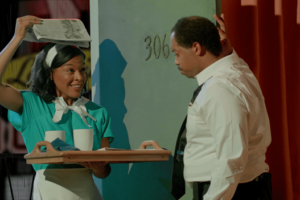 He may have been a martyr, but he wasn’t a saint.

Martin Luther King, Jr. strayed from his marriage. He had smelly feet and holes in his socks. He was vain, fearful, sometimes paranoid. But his Dream was pure and deeply felt.

All this we see and learn in “The Mountaintop,” Katori Hall’s 2009 drama set in Room 306 of the Lorraine Motel in Memphis, the night before the civil rights icon was assassinated.

Earlier that evening, he had given a memorable speech in support of the striking sanitation workers of Memphis. In its conclusion, he said, presciently, it turned out, “I’ve been to the mountaintop… And I’ve seen the promised land. I may not get there with you.”

When we meet him, in his shoddy motel room, he’s exhausted, hoarse, and desperately craving coffee and a cigarette. He’s trying to figure out how incendiary he should get in tomorrow’s speech, starting with “Why America is going to hell.” (“They’re really gonna burn me on a cross for this one,” he chuckles).

Then, an attractive young maid comes in with Room Service. She has coffee and, coincidentally, his favorite smokes, Pall Mall.

He gives her the once-over (more than once). They flirt. They have a pillow-fight. He might be inclined to take things further, but they both pull back, though she claims that she hasn’t been very saintly either.

And then they get into a spirited discussion of the best way forward for their people. She even puts on his jacket and shoes and gives a fiery speech (“Today is the day I tell you to kill the white man. Not with a gun; with your minds”).

Although he doesn’t agree with her tactics (if she were a man, he says, she’d be Malcom X), he likes her sense of humor (“morbid, like mine”).  They talk about Mortality and Death.

She calms him when the storm outside rages with thunder and lighting that makes him hit the floor and grab his chest — and exclaim, eerily for this moment, “I can’t breathe.”

She seems to know a lot about him. She even calls him by his real Christian, childhood name, Michael. (He took on ‘Martin Luther’ when he was young). At one point, skeptical because she knows too much, he thinks she’s a spy, working for the FBI.

There’s a kind of luscious twist that would be a terrible spoiler to reveal.

But the main point of the piece is showing the man behind the paragon — smelly feet, holey socks and all. To humanize the speechmaking, sermonizing, minister and dreamer.

The play is a fantasy, a highly effective and enlightening one, wherein King gets a glimpse of the future of the civil rights movement and the plight of Blacks in America. The gut-wrenching montage of archival photos and footage take him right up to George Floyd, Brionna Taylor and Kamala Harris. This vision of what’s to come forces him to consider his destiny and his legacy.

Not only is this an ideal time to revisit the play, but it’s being produced in a highly appropriate way: as a collaboration among three theaters — one more established (The Roustabouts) and two younger companies it’s mentoring through the process (The American History Theater and the Teenage Youth Performing Arts Theatre Company).

The American History Theater actually held the rights to the play, and its artistic director, Kandace Crystal, skillfully directed this production.

Caiel Noble, who is well-trained but is, surprisingly, making his professional theater debut, is excellent as Dr. King, exuding all the passion and power, as well as the fear and anger, of the great man.

Ashley Graham, an actor/instructor from South Carolina who has appeared on several local stages (Coronado Playhouse, Trinity Theatre), strikes a pitch-perfect tone as the maid. She has the accent and the attitude, the playfulness, strength and commitment to her task.

As a side-note, the maid, Carrie Mae, was named after the playwright’s mother — to give her the opportunity to ‘be’ in the same room with Martin Luther King that she was denied years ago. As a young girl in Memphis, her grandmother wouldn’t allow her to go hear him speak, because of the potential for violence.

The production design (Reiko Huffman) is detailed and convincing, and the filming is expert (the DP/editor is seven-time Emmy Award-winner Michael Brueggemeyer).

Twelve years after the play was written, 50+ years after MLK’s death, it feels like society hasn’t progressed all that much, and equality is as elusive as ever.

That makes the piece timely — and sadly, timeless. We could use another Dr. King right now, a powerful spokesman and acknowledged leader. He or she is out there, for sure. We just have to keep the faith — and keep fighting for equal rights.