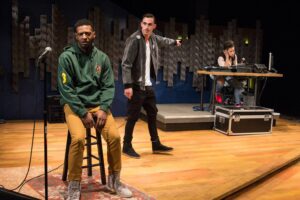 “Sometimes, you gotta get on up and just say it!”

Fight the power. Object to the status quo. Protest the senseless police killing of Black people.

It took the (presumably fictional) Boston murder of 17 year-old Jerrod Davis — unarmed, but shot by police 18 times — to nearly break up a successful interracial hip hop band just as they’d hit the heights, getting their big break on ‘The Tonight Show.’

The white frontman, Pinnacle, who’d grown up side-by-side in the same poor ‘hood as his Black hype man, Verb, doesn’t have any interest in dealing with politics.

But Verb can’t just turn away. He revealed a politicized “Justice for Jerrod” t-shirt at the end of their TV gig. He refuses to back down about taking a stand. So does Pinnacle, who takes the female, mixed-race beatmaker, Peep One, torn between the two guys, and goes on tour without Verb.

Verb takes to the streets to protest and gets arrested (again). On their return, Peep convinces Pinnacle to bail him out (again).

Despite the crisis of communication, the challenges of confronting race (and for Peep, the misogyny of the hip hop world), the three reunite, fully cognizant of the fact that they’re better together.

Pinnacle comes to see that they have speak up and speak out. As their new song, “Get on up and just say it,” comes together, it serves to reunite them, musically and emotionally.

With its cool, hip, sometimes psychedelic graphics, “Hype Man” is a newly re-imagined digital version of a successful 2018 play by poet, playwright, essayist and rapper Idris Goodwin (who wrote all the clever lyrics and rhymes). The original cast is back for this exciting collaborative production from Company One and Harvard’s American Repertory Theatre, co-presented by the San Diego Repertory Theatre.

The piece is about a lot more than race — though that’s a crucial through-line. It’s also about how a hip hop song comes together (“Phase One,  the beats and rhymes; Phase 2, the accents, ad libs and all the texture”).

Peep lays down the catchy beats and rhythms. Pinnacle comes up with the complex rhymes, and Verb is the backup rapper who ‘hypes’ the crowd with improvisational additions and call-and-response chants.

It’s the music that’s always driven the trio, and ultimately, the music that brings them together. It may even help convince the multiracial orphan, Peep, to uncover her background. Pinnacle gets woke. And Verb, who has an admittedly “reckless” past, and a court-ordered therapist, is also finding his rightful place in the world.

The musical play, which won an Elliot Norton Award for Outstanding New Script from the Boston Theater Critics, is wonderfully acted and sharply directed (original stage direction by Shawn LaCount, with film direction by LaCount and John Oluwole ADEkoje).

There’s fire aplenty— both vocal and dramatic —  in the three principals: Michael Knowlton as Pinnacle, Rachel Cognata as Peep and as Verb, Kadahj Bennett, an actual freelance beatmaker, and frontman for two bands.

It’s a musically rich, multi-layered, instructive piece of work that couldn’t be more timely, in its consideration of police brutality, fame and friendship, privilege and cultural appropriation, and whose responsibility it is to speak out against social injustice. (Non-spoiler hint: Everyone’s).