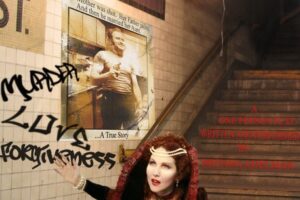 A macho wannabe mafioso and a free-spirited boho artiste. Sounds like a monumental mismatch. And it was.

Brenda Adelman’s parents took the ‘fun’ out of dysfunctional. Mom traveled the world; Dad gallivanted with other women. They fought endlessly, split up regularly, but always came back together for more of same (plus hot sex).

Until one night, only one of them lived to tell the tale.

Adelman’s father never confessed to murder, but her mother was shot in the head at point-blank range. Not only that, but two months later, her father married her aunt (Mom’s older sister).

You can’t make this stuff up (well, Shakespeare did). Adelman’s story is such a close parallel to “Hamlet,” she wrote a solo play as catharsis, to give herself some closure, to find healing, to proffer forgiveness (to herself most of all), so she could be free to move on.

Trained as an actor and a healer, with a Master’s degree in Spiritual Psychology, she turned her pain into entertainment.

The murder occurred in 1995. Adelman has been performing “My Brooklyn Hamlet” since 2006 — in 10 states and four countries.

Now, as a co-production from Scripps Ranch Theatre and the Oceanside Theatre Company, the 60-minute play Adelman wrote and performs is streaming for two weekends only (through 5/2). Charles Peters deftly directs, and Ted Leib is the skillful cinematographer.

Adelman makes for wonderful company. She deftly and amusingly portrays both her tough-guy father, a Brando-looking “cross between Joe Pesci and Tony Soprano — only Jewish,” who always said, in his best Brooklynese, “You’re my Brenda-Bedenda, my great defenduh”; and her more ethereal, esthetic mother, who read her Shakespeare as bedtime stories.

Her father introduced her to guns — when she was 6 — and he let her drive his fire engine red Cadillac at age 10. A regular family outing was a day at the shooting range.

Adelman spent a lot of time tying to escape from the madness — but she always came back — and almost always took her father’s side. Until she couldn’t anymore.

Hamlet’s existential soliloquies course through the piece (“for when regular words can’t possibly express my emotions adequately,” Adelman has said). Humor and horror sit side-by-side in the storytelling.

And yet, a level of uncertainty hangs in the air; the audience could use a little closure as well.

But Adelman has clearly turned her pain into art. And after we go along for the harrowing ride, we might just appreciate our own familial craziness more, if only by comparison. And we can marvel at the healing power of writing and sharing and theater.