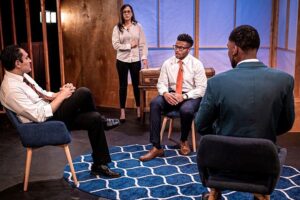 Some people simply refuse to see a Shakespeare play. They can’t track the language. It makes them uncomfortable not to be able to understand every word and phrase.

I have several friends like this. I tell them to just let the words wash over them. I assure them that they’ll get the gist and will totally be able to follow the actions, characters and emotions.

I had to take my own advice while watching “Dry Powder by Sarah Burgess, now streaming from Backyard Renaissance Theatre Company.

Not only is the vocabulary dense, opaque and unfamiliar to me, but it goes by at a breakneck, rat-a-tat, New-York-minute pace, which may be appropriate for the setting, but not for audience comprehension.

The crisis is relatively easy to grok. It’s all about private equity traders with big deals and bad optics.

Rick, the boss of KMM Capital Management, has just splurged on an extravagant second-marriage engagement party (including a live elephant) on the same day his firm forced massive layoffs at a national grocery chain. He’s being eviscerated by the media.

Meanwhile, he’s trying to acquire a struggling family business, an American-made luggage company, that he thinks will distract the press, or rescue him, from the publicity nightmare.

The details of the deal are presented to him in conflicting plans from his two co-founding managing directors.

The ruthless rapacity, the flagrant amorality, is sometimes breathtaking. It’s the merciless manipulation of numbers to maximize profit, human collateral be damned.

Since the award-winning play premiered at the Public Theater in New York, the gap between the corporate top (CEOs) and bottom (regular employees) has only grown, exponentially. From 1978 to 2019, compensation grew 14% for the average worker; it rose a whopping 1167% for CEOs. The ratio of boss-to-employee pay was 61:1 in 1989. It’s now 320:1. Shocking and sickening.

One amusing moment has the two obscenely competitive managing directors battling over who had the higher GMAT score (Graduate Management Admission Test, never defined) to get them into an Ivy League MBA program. The woman, whose score is 10 points lower, goes so far as to call Yale “a minor Ivy”).

Mostly, the numbers, stakes and tension are seriously high, though some of the specifics may be impenetrable to the non-business types among us. The title (which I had to look up) refers to available capital that can be invested quickly.

Turns out, Rick doesn’t have as much as he thought, so he takes a less-than-savory route (by way of China) to dig himself out for the new acquisition.

The ravenous wheeling-and-dealing seems to know no bounds.

In this intense 85-minute production, tautly directed by Francis Gercke, and skillfully filmed by his son, cinematographer Jonah Gercke (edited by Rachel Eubanks), the performances are potent.

Jessica John (Gercke) is nearly robotic as the mono-focused Jenny, who fiercely massages the numbers with absolutely no regard for the people involved.

As her counterpart, Seth, an effective Carter Piggee displays slightly more humanity. But only slightly. Jeff, the CEO of the luggage company (convincingly played by James Hancock III), seems to be the most humane — until he isn’t. As Rick, Javier Guerrero gives a natural performance, as always, but in mien and demeanor, he doesn’t seem like a filthy-rich titan of his industry.

Decades ago, there was a brief moment of pushback against the unfettered avarice. A suggestion of Best Practices posited that a CEO should make no more than ten times the average worker’s salary. Now, there are no rules, no limits.

This play sheds light on the very darkest side of capitalism. But the characters show us the nuances of the deal-making, and a glimpse of some of the more ravenous canines in this dog-eat-dog universe. It’s a biting indictment.