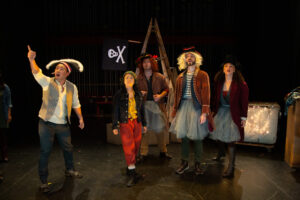 Loosely (if not fully successfully) tied to the ghost light that burns in every theater, the musical based on multicultural myths and folktales is set backstage in an empty theater (California Center for the Arts, Escondido, which commissioned the piece).

We’re first informed that the ghost light isn’t really about ghosts (though many superstitious theatermakers might disagree). It’s intended to keep people safe (“last to leave, first to come back”). And it’s a reminder, we’re told, that theaters will return.

Then we’re introduced to Celeste (a name that means ‘heavenly’), a young girl who “remembers when there used to be a Sun.” Celeste is the daughter of the Moon, which is fading daily since the disappearance of the Sun.

With the prodding and support of Luna, a spunky bird (a charming puppet), she decides not to miss and lament her mother, but to take action. So begins her quest to find the light and return it to the Moon.

Since the musical is family-friendly, suggested for all ages above 6 (though for school groups, it’s recommended for grades 2-5), and since Blindspot is dedicated to “the intersection of advocacy, education and entertainment,” there’s plenty of learning involved.

Celeste’s self-calming chant has always been a rhythmic recitation of the different kinds of light: “phosphorescence, incandescence, luminescence.”

As she travels by sea, meets up with Pirates and a whale (another wonderful — uncredited — puppet, big enough to require two manipulators), Celeste finds and describes the three kinds of light, and discovers that the final, important ingredient to give back the Moon’s light — and add the stars — is Connection.

So, amid sea shanties, ballads and lively songs of other sorts (book and lyrics by Blindspot co-founder Blake McCarty, music by Ian Brandon, based on a story by Desha Crownover, who directs), it has a lot going on and gets a bit muddled along the way.

Clocking in at just 55 minutes, the play’s puppets and adventures should hold the attention of elementary schoolers, who’ll learn quite a bit about celestial and oceanic light. They may not truly grasp the notion (or relationship) of a ghost light, but that seems to be geared more for the adults and theater folks in the audience. Ditto the return of theater (fingers crossed).

The show is available to stream on demand, and seems just right for schools, who can arrange showings by contacting education@blindspotcollective.org.

The company is also offering groups a workshop to help young audiences explore themes in “Lit” and “build their own creativity.”