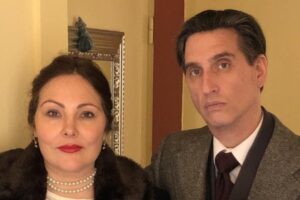 If that quote is accurate, as noted in Hershey Felder’s latest biopic, “Nicholas, Anna & Sergei,” then Felder — the multi-talented, multi-lingual, multi-hyphenate (writer-actor-director-producer-piano performer) — has pretty much stuck to those proportions in recounting the composer’s life.

Extended excerpts from 14 Rachmaninoff creations — including five on the list of his Top Ten Most Romantic Works — are played by Felder, coursing through the two-hour film, providing a sound-bed for the story, which is told as a deathbed fever-dream, a morphine-induced hallucination.

Tsar Nicholas II (J. Anthony Crane), whom Rachmaninoff both revered and reviled, is an almost constant presence. Of course, when the composer was dying of advanced melanoma in 1943, the Tsar had been dead for 25 years. But he serves as a mostly silent reminder of the much-missed Mother Russia.

Another reminder takes the form of Anna Anderson (wide-eyed, silent Helen Farrell), who makes an appearance an hour into the Felder proceedings, claiming to be the Grand Duchess Anastasia, the Tsar’s youngest daughter. She refuses to speak Russian, but insists that she survived the Bolshevik firing squad that obliterated her family in 1918. (A coda at the end of the film provides more accurate, updated  information about the real plight of Anastasia, though the fable of her survival continues to proliferate, in books, movies, and most recently, a musical).

Rachmaninoff, who spent his last two years living at 610 North Elm Drive in Beverly Hills, brings Anna to America (as he did with many émigrés) and sets her up with a relative in New York. But she is too aggressive and obstreperous to remain there, and is sent to an asylum in upstate New York, until she’s deported to Germany, and winds up in another asylum, where she was declared “completely sane.”

Though he never saw her again, Anna “left a lasting impression” on Rachmaninoff, and the thought of her helped him through another of his prolonged dry spells, allowing him to compose again. He “would think of her less for who she was, but for the connection to home.”

Rachmaninoff’s life was a series of head-spinning ups and downs: aristocracy to poverty; loss, abuse and abandonment; child prodigy to Soviet-declared “degenerate” (because he was a Tsarist); extreme fame and recurrent depression.

The details are told in monologues and voiceover narrative, expressed monotonally, which is, presumably, how the dour composer spoke. Rachmaninoff was said to have an austere, severe countenance, though he was kind-hearted and generous. But the narrative approach (there is very little dialogue in the piece) and its lack of tonal/emotional variety serve to distance us from the composer. We get the facts, but not the feelings of the man — except in his music, which is extremely expressive, by turns fiery and melancholy, lush and technically demanding. (The towering 6’6” composer had a 12-inch hand-span!).

Among the famous pieces — including Vocalise (opus 34 No. 14), several Preludes and the 18th Variation of Rhapsody on a Theme of Paganini — astute listeners will recognize a portion of the Piano Concerto No. 2 Adagio Sostenuto, which American singer-songwriter Eric Carmen borrowed for his 1975 power ballad, “All By Myself.” Unlike previous Felder productions, we are given little temporal or emotional context for the chosen pieces, whose titles are only provided as an addendum to the film.

Each of Felder’s eight pandemic ‘Live from Florence’ productions has gotten progressively more elaborate. This time, he has employed a large cast and a full symphony orchestra (I Musicisti Fiorentini). The performances benefit 24 participating theaters, including the San Diego REP.

The archival footage, from the Beverly Hills house to the atrocities of the Russian Revolution, is wonderfully superimposed on the live action (excellent film production and editing by DeCarli Live, the film company of Felder’s co-director Stefano DeCarli; Trevor Hay was the stage director). The shots of Felder’s face reflected in the piano are especially appealing, as are the costumes (Giulia DiRenzi, Lorena Vedelago) and lighting (Erik Carstensen, who also puts in a brief appearance as the Concierge at the Sherry-Netherland Hotel, NYC).

At the outset, troubleshooting suggestions were provided to counteract ‘buffering problems,’ of which I had many. The recommendations, alas, didn’t help.

Felder is calling this “a musical film.” It’s more concert than play; his piano-playing is expertly performed. But there’s little dramatic tension, though Rachmaninoff’s life was actually rife with drama.