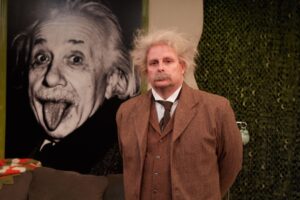 Hank is a little meshugah, to borrow a Yiddish word from the play he appears in (and from my Grandma).

He’s so manic, he makes your head spin, talking a mile-a-second, running around his tiny apartment, doing voices (Groucho, anyone? And of course, Einstein). He even performs a standup routine in his tiny living room.

He has tons of alarms going off at irregular intervals, to remind him to monitor his thoughts by writing in his journal — mostly about his dreams (he falls asleep repeatedly), which he tries to interpret with the help of a book. He sits on his dilapidated sofa, in his messy apartment, under a huge poster of Albert Einstein  — the most famous one, with the exasperated genius comically sticking out his tongue at relentless reporters on his 72nd birthday.

Hank talks to Einstein. Sometimes Einstein talks to him. Ultimately, Einstein talks him down — or up, from the depths of depression. Einstein gives him a reason to move on from grief and go on living.

It takes a long time (in a short, one-hour solo play) to figure out what’s really going on with Hank. The reveal comes in the final moments, though it’s somewhat predictable by then.

“Einstein Comes Through” was written by L.A.-based writer Marc Silver and David Ellenstein, artistic director of North Coast Repertory Theatre, which produced the play (live) in 2005. Now, Ellenstein is directing Jake Broder in a filmed version of the wacky, hyperactive role.

Broder, who has a boatload of talents (and looks quite convincing as Einstein when he dons the wig and mustache), finally calms down enough for us to understand that Hank is a regular zhlub who, in the guise of the great physicist, teaches science to kids (who love him, apparently, based on their fan mail).

The play takes a circuitous route from frenetic (and Borscht Belt) comedy to bittersweet sadness, from desperation to hope. But we may be exhausted before we get to the poignant ending.

North Coast Rep resident scenic designer Marty Burnett has created a delectably run-down and dated apartment (the avocado kitchen counters are an especially nice touch). When the kitchen window shade opens, animated memories stream in  — disturbing moments from both Hank’s and Albert’s past, including scenes of Nazis in Einstein’s native Germany.

The lighting (uncredited) is effective, and the cinematography and editing, by NCRT jack-of-all-trades Aaron Rumley, are expert.

But between the frenzied pace and the ear-splitting alarms at the beginning, it’s hard to get past the headache and get to the humor and pathos.

Still, it’s an excellent performance. You’ll also learn a few things about Einstein (faithless husband, lousy father, won the Nobel in 1921 not for Special Relativity, but for Photoelectricity, a common, and for him annoying, misconception).

You might even pick up a few Jewish jokes and Yiddish words along the way.