“THE METROMANIACS” at The Old Globe 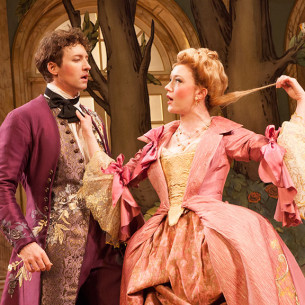 The lights come up on a sylvan wood – plopped inside an ornate drawing-room. Servants portray other servants – or their masters – in a play-within-a-play. There’s a dizzying array of noms de plume. Yiddish words mix with French. Britney Spears gets a mention. And in case you think things can’t get worse; the whole thing’s presented in rhyming verse!

Welcome to the world of David Ives, that bad boy of linguistic legerdemain, who gleefully takes often obscure French farces and spins modernized comical gold he calls ‘translaptations’ – a portmanteau word that conflates translation and adaptation.

In “The Metromaniacs,” he’s working from a 1738 play written by Alexis Piron, “Le Metromanie,” an oh-so-French term for those afflicted with an outsized affection for poetry. The plot is so convoluted, even the players admit they can’t follow it. But the farcical sausage gets made as we watch in wonder, and everyone pairs up in the end – with a titillating little twist.

The intellectually clever mixes with the supremely silly – but hey, it’s farce, what do you expect? There’s got to be an ingénue with several suitors, at least one wily servant (here there are two), and a rich old man who is both indulged and duped. There must be mistaken identities and extravagant deceptions, missteps and miscommunications, not to mention pranks and pratfalls —  all occurring at warp-speed.

The delectable Old Globe production is presented in association with The Shakespeare Theatre of Washington D.C., under the direction of Michael Kahn, who commissioned the work and has brought most of his original cast and design team.

The rhymes and antics are outrageous and often hilarious. The cast is terrific, the costumes sumptuous, and the set opulent. Perhaps most delicious of all, the story was inspired by a real-life literary scandal involving the philosopher Voltaire, who fell in love with the creations of a poetess who turned out to be a gentleman with a pen-name. Quel horreur!

You’re sure to be swept up in the inanity and insanity. You might just turn into a metromaniac yourself.