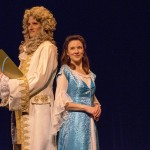 It’s a fabulous story: a brilliant woman, an exceptional scientist, intensely loved by three men — including the great Voltaire, whom she inspired and educated scientifically. Her theories were revolutionary. She was the first woman published by the Académie Royale Des Sciences, she had the temerity to challenge a physical precept of Sir Isaac Newton, and she was a major influence on Einstein’s Theory of Relativity. Her translation of Newton’s seminal “Principia Mathematica” is still in regular use in France today.

A terrific story, but alas, not compellingly told by playwright Lauren Gunderson in her 2009 non-linear drama, “Emilie: La Marquise du Châtelet Defends Her Life Tonight.” Not only is all the arcane science off-putting, the play’s structure is emotionally distancing. So much more is told than shown (a cardinal No-No in theater) that we don’t get to actually feel for the character and her tribulations in trying to be listened to and respected in 18th century France.

The same issue bedevils a modern mathematician in “Proof,” the David Auburn play that’s currently running at Oceanside Theatre Company. (A brilliant female mathematician is also at the center of Tom Stoppard’s “Arcadia”). Both are more forceful and captivating pieces of drama.

In this newer work, now playing at New Village Arts, Emilie has come back from the dead to tell her story and get some sense of closure and completion in her life and work (she died in childbirth at age 43 in 1749). She’s obsessed with legacy and the question of what lasts.

But she’s constrained by certain “rules of return,” as it were, such as not being able to touch any still-living person (cue the sound of explosion and breaking glass for violations). So she has a stand-in, her younger self (AKA Soubrette, gracefully and playfully portrayed by Christina L. Flynn), who enacts all the scenes (introduced by Emilie as “the scene in which…” such and such happened), and she gets to hug, kiss and have sex with all the men. Lucky girl.

As clever as the structure tries to be, it also keeps us at a remove. And that may be all well and good for discussing science. Knowledge and theory equate, on Emilie’s giant-sized chalkboard (set designed by director Kristianne Kurner) as Philosophy. That stands in opposition to considerations of Love (she makes hashmarks under each heading as she progresses in either domain).

I thought perhaps my meagre scientific background kept me from understanding all the math and physical science, but my husband, who was a Physics doctoral student, couldn’t follow it all either. The terms Emilie repeatedly uses (“living force” and “dead force”) are not currently utilized and are never clearly defined in the play. So, her whole raison d’être eludes us.

Further, there are just too many themes crammed into this dramatic cauldron: not only Heart vs. Mind, and intellect vs. emotion, but Time vs. Space, Women vs. Men (and the choices available to each, sexually and professionally), but also, the drive for popular acclaim (Voltaire) vs. the Truth (Emilie). Some of the language is jarringly anachronistic (Emilie keeps saying, for example, that Voltaire’s criticisms amount to “trashing” her most important work). Not to mention ungrammatical (one of them creates a work explicitly “for you and I.” Ouch).

As Emilie, around whom everything revolves, Jo Anne Glover gives another of her solid, grounded, credible performances. The rest of the cast is fun, flexible and effective, but they pretty much serve as two-dimensional props – or set-pieces to act out her life. There is minimal development of characters or relationships.

In her own creation, playwright Gunderson went for Intellect instead of Emotion. The reverse choice would have served her – and Emilie – better.