“THE LAST MATCH” at The Old Globe 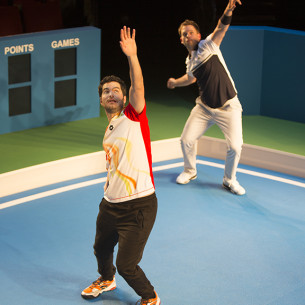 Bet you didn’t think tennis could be played without a racket, a ball or a net.

Well, there’s a pretty compelling court competition going on at The Old Globe, in the world premiere of “The Last Match,” by Anna Ziegler.

It’s life or death out there – in more ways than one. At age 33, Tim Porter, winner of six U.S. Open tournaments, might be playing his last. Sergei Sergeyev, a Russian upstart, is a serious contender for the title.

The set, on the arena stage of the White Theatre, is designed to look like Arthur Ashe Stadium in Queens, New York – though, until the game begins, the unadorned blue oblong looks suspiciously like a swimming pool.

But the scores magically rack up on the scoreboard, in this showdown between young and old (well, sports-old, anyway), between American and Russian worldviews, between an unmarried orphan and a new father, spotlighting the beginnings and endings of life. There are questions about one’s place in the world, the pressure and pain of professional sports, and the emptiness of never-ending ambition.

The action time-hops on and off the court, to show us the men’s fraught relationships with their women and each other. What does it mean to achieve your goals and wildest dreams? Does that equate to happiness? What about non-pros, who settle for less?

The female characters are far less defined than the men, but they have their own crises of identity and mortality.

In short, there is so much more than tennis going on here. The game is a metaphor for life – we’re each alone out there, doing the best we can. But the match remains the focus — insistently suspenseful and exciting.

Ziegler’s dialogue is crisp, fast-paced and funny. Under the expert direction of Gayle Taylor Upchurch, the cast is potent and the players’ impressive moves are perfectly timed with wonderful, thwacking sound effects.

If you don’t come out of this show thinking about more than tennis, you really haven’t had your eye on the ball.