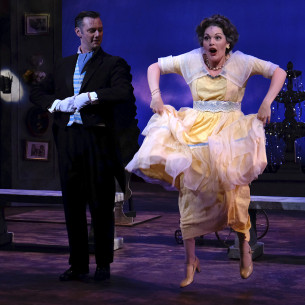 As the central character, the musical-theater-addicted Man in Chair, explains it, “In a musical, when you have a problem, you sing and dance, which is so much more interesting than whining about it. Musicals take you into another world; they help you escape the dreary horrors of the real world.”

I can’t think of a show that more thoroughly, entertainingly delivers on that description than “The Drowsy Chaperone” – especially as presented at SDSU, under the superb direction and choreography of new Theatre faculty member Stephen Brotebeck.

This is the best production I’ve seen of this sweet-and-silly tuner with its delicious way of making you laugh while also touching your (romantic) heart.

Originally written in 1997 as something of a parodic goof (music and lyrics by Lisa Lambert and Greg Morrison, with book by Bob Martin and Don McKellar) for the wedding of friends, the show took on a wacky, unexpected life of its own, and went on to win five Tony Awards in 2006.

With stock characters from every old musical you can think of, the show features a show-within-a-show structure that’s narrated by Man in Chair (the marvelous Jacob Brent, an MFA student with Broadway credits), a sad sack theater devotee who lives for his record albums (“Yes, records!,” he scoffs at the delighted student audience). He’s introducing us to one of his very favorites, “The Drowsy Chaperone,” that harks back to a more glamorous time, the 1920s.

He knows every note, every scratch, every backstory on every actor. His enthusiasm and his honest criticisms of the flimsy piece are infectious, and though we know that, this being a musical comedy, everything will come out right in the end (“In life, nothing ever works out right,” Man in Chair laments), and it will all finish with a wedding (or many weddings, in this case), we get totally caught up in the on again/off again nuptials of the superstar Janet Van De Graaf (spunky Jessica Humphrey) and her intended (adorable, agile Kikau Alvaro, who also has Broadway experience under his belt).

There are references to other shows (the gangster duet, for example, à la “Kiss Me Kate” – extremely well done here by Dakota Ringer and Connor Boyd), and total goofball songs (“Bride’s Lament,” about putting her ‘Monkey on a Pedestal’). There are also some genuinely funny numbers (“I Am Adolpho,” the self-aggrandizement of the Latin lothario hilariously played by Randall Eames); inspiring ones, more or less (“As We Stumble Along,” sung by the elegant but ever-inebriated title character, excellently captured by Courtney Kattengell) and romantic ones (“Love is Always Lovely in the End”).

At SDSU, the singing and dancing are terrific (including a knockout tap number), the costumes (Emily Wilson) are gorgeous, the sets (Brian Redfern) are highly imaginative, and the lighting (Caroline Andrew) highlights it all.  The 24-piece orchestra, under the assured direction of faculty member Robert Meffe, is superb. The mics were a bit finicky the night I was there, but otherwise, this was a totally engaging, amusing and highly professional production.

Now, wouldn’t you like to escape from your own dreary world for a couple of hours? (You can even write your own Post-It of ‘What I love about musicals’ on the panel hanging in the lower-level lobby). Treat yourself to a musical escape; you’ll be glad you did.