“THE LUCKIEST” at the La Jolla Playhouse 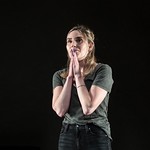 The action begins nearly at the end, and leapfrogs back in time, as it reveals the evolution of a deep friendship and the devolution of a young woman’s health.

Straight, single, 30 year-old Lisette is boisterous and bossy when she meets Peter, also single, and gay. She confesses that she likes “morbid conversations,” and forces him into a theoretical discussion of what he’d do if he were in “an indefinite coma for an indefinite time.” She swears that she “would still want to live, even then.”

But after she’s diagnosed with an untreatable degenerative disease, her thinking changes, and she wants her feisty mom and her dutiful bestie to allow her to take charge of her own life.

Lisette is direct, honest and authentic. We never learn exactly what she does for work, but she’s smart, loquacious and charismatic. We witness an often contentious relationship with her mother, but an unfailingly devoted one with Peter.

We don’t see evidence of everything on the list of what Peter likes most about her, including her “insanely impressive vocabulary,” her patience, and her enviably loving relationship with her mother. But as he concludes his heartfelt list, sniffles can be heard throughout the theater.

“The Luckiest” debuted last year in the La Jolla Playhouse DNA New Work Series. Now, under the direction of Jaime Castañeda, the dialogue crackles and the performances are compelling.

Reggie D. White is affable in the under-developed role of Peter. Deirdre Lovejoy is a comically kick-ass mom. And Aleque Reid is a marvel as Lisette, conveying a remarkable range of emotions with her expressive face. But one wonders, since she’s so smart, and since Stephen Hawking is mentioned, why no effort to try an electronic communication device, so she can express herself to the end?

But these are minor quibbles. The play is solid, humorous and heartbreaking, both gut-wrenching and thought-provoking.