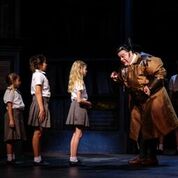 You gotta love a brainy, bookish young heroine. She may take guff for her smarts—ridicule, bullying—but she always winds up with a top-shelf ending. For instance, Belle gets her Beast-turned-Prince and Matilda gets a loving home.

In “Matilda, the Musical,” the protagonist is not only brilliant; she has superpowers, though less than the film version exhibits. The stage offers different possibilities, cleverly executed at Moonlight Stage Productions.

The wildly popular book by British author Roald Dahl (1916-1990) was published in 1988, and was notable for making the children (for the most part) wiser, more rational and more compassionate than the adults.

The musical had its world premiere, courtesy of the Royal Shakespeare Company, in 2010, and soon moved to the West End, where it continues to run. When “Matilda” opened on Broadway in 2017, it added five Tonys to its seven Olivier Awards.

The national touring production came to the Civic Theatre in 2017, and a frustrating experience it was. The inadequate, ineffectual sound system made virtually every clever lyric (by Tim Minchin, who also composed the score) and dialogue (book by Dennis Kelly) incomprehensible.

Some sound/miking/clarity problems were evident at Moonlight Amphitheatre as well, but that is the sole weakness in an otherwise stellar production.

The large cast, more than three-dozen strong, features numerous highly talented children. And the primary roles are all excellently acted and sung.

Center stage, of course, is Matilda herself, played with conviction, panache and a thrilling naturalness by L.A.-based Charity Rose, whose only other stage role was in “Annie” (one of her sisters played the lead). She has presence, charm, and an appealing voice. Her performance is a knockout.

There isn’t much nuance in the role of the battleax headmistress, Miss Trunchbull (always played by a man), and Randall Hickman gives it his commanding, over-the-top all.

Kevin Hafso-Koppman is, as always, unrelentingly funny as Matilda’s awful, abusive, moronic, scheming, lying father, who refuses to even acknowledge that she’s a girl.

The 5 year old’’s mother is no better, a shrill, self-involved, dancing harridan played with an ear-piercing speaking voice (coupled with deft dancing and singing) by Kristina Miller-Weston.

Shirley Johnston is delightful as the story-loving librarian, Mrs. Phelps, the only other pleasant adult besides Matilda’s cowering but nurturing teacher, Miss Honey, whom Ashley Fox Linton embodies with a tentative personality but a beautiful voice.

Vanessa Dinning did an admirable job with the range of English accents.

Colleen Kollar Smith provides inventive and witty choreography, her first at Moonlight, where she has served as managing director since 2017, though she has directed and choreographed at many other theaters around town.

All the elements are there, including colorful costumes, malleable sets and ebullient direction by ace Broadway (and Moonlight) performer Jamie Torcellini.

Still, the show feels long. At 2½ hours-plus, it could really use a trimming. But it’s a gift to children of all ages, and a reminder that you can take charge of your own story, and “even if you’re little, you can do a lot.”

Moonlight, coming up on its 40th anniversary next year, continues to provide us with spectacular, Broadway-caliber productions, every summer under the stars. Grab the family and go!