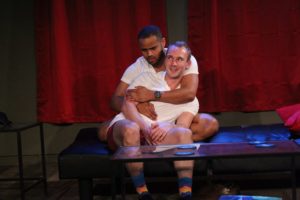 People like to categorize and dichotomize. Ambiguity is unsettling. But ambiguity abounds in “Straight.”

Emily thinks she’s in a monogamous relationship with Ben. She can’t understand why, after five years, he’s still reluctant to move in with her. What she doesn’t know (and for her own sundry reasons, doesn’t probe too hard to find out), is that he’s simultaneously seeing Chris, a young college guy he met on Tindr.

Love is a slippery thing: unpredictable, sometimes unexpected, confounded by issues of identity, self-awareness and self-acceptance. The lines around all those sexual identity boxes are getting blurrier by the day.

How all this plays out unfolds slowly in the one-act, “Straight,” now having its West coast premiere courtesy of a new theater company in town: Loud Fridge Theatre Group.

The play accretes in short scenes that often seem to go nowhere, but they do ultimately add up. In the current production, the proceedings are made even slower by unnecessarily long blackouts between scenes.

But interstitial pacing is the only weakness in this otherwise robust production, co-directed by three women: two are also well-regarded local actors—Kate Rose Reynolds and Andréa Agosto—joined by new San Diegan Leigh Akins, who recently directed and performed at Scripps Ranch Theatre.

Reynolds and Agosto are co-founders of LFTG, with John Wells III, a familiar presence on local stages, who is the new company’s artistic director and this show’s production manager. Reynolds is also credited with lighting design.

The aim of the new group is “telling stories that are bold, honest and diverse—and telling them loudly.”

Fortunately, that mission doesn’t carry over into their acting style. The three performers deftly bring shading and nuance to their characters, each self-involved and self-deceiving in their own way.

Wells’ Ben is a tightly-wrapped 26 year-old investment-bank drudge, who works too much—and uses work as an escape-hatch when needed. Alcohol, which, along with sports-watching, is his second commonality with the not-that-much-younger Chris, also helps dull his fraught, uncertain state.

New-to-San Diego, Arielle Siler is ebullient and nurturing as Emily, a dedicated, mouse-injecting Ph.D. student in epigenetics, a field that touches on the biology of sexuality. Her obsession with her career engenders conversations about nature/nurture and the possibility of altering behaviors and proclivities, a topic germane to the sexual uncertainty that afflicts Ben (and maybe even Chris). Emily thinks Ben’s obvious but unexplained stress can be alleviated with a food.

The third leg of this love triangle is Chris, a 20 year-old, ironic, self-deprecating history major who’s sure(r) of his sexual preferences—though he hasn’t yet gotten around to telling his friends or family he’s gay. L.A.-based Bryce Gerson is pitch-perfect in the role. He’s boyish and buff, and his insouciance has just the right edge of needling humor.

The way these three play cat-and-mouse, and the way it all ends up, keeps the audience intrigued for 80 minutes—and beyond.

Co-created by New York-based Drew Fornarola and now-Chicagoan Scott Elmegreen, both accomplished writers of plays and musicals, “Straight” was a New York Times Critics’ Pick  when it ran Off Broadway in 2016. This is the play’s 16th production; it has already been translated into several languages (Spanish, German, French, Hebrew) for productions abroad. It has also been seen in cities representing the wide-ranging political spectrum in America: from Wesleyan College to Salt Lake City.

In his talkback after a weekend performance, playwright Fornarola said he gave permission for this cast to change a few lines and references, to accommodate the decision to make Ben and Emily black and Chris white. That adds a frisson of racial politics on top of the gender politics already confronted in the piece, which also begs the larger question: Can anyone find everything they want or need in just one person?

This production makes for an impressive and auspicious beginning for a new theater company (though the no-elevator, 3 flights up at the Tenth Avenue Arts Center may be daunting for some).