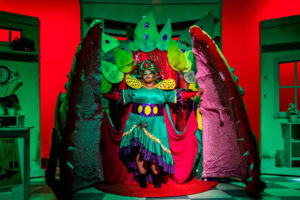 Everywhere you look these days, there’s a book, show or movie about ‘the end of the world as we know it.’

We can die by disease, monsters, zombies, natural disaster, nuclear catastrophe… and then, of course, there’s the man-eating plant.

That would be Audrey II, from the 1982 horror comedy rock musical perennial, “Little Shop of Horrors,” with its clever book and lyrics by the late Howard Ashman, and catchy music by the prolific Alan Menken.

There are some real powerhouse voices in the cast, but there’s an excess of belting bombast. Many of the characters have become cartoonish, but that helps them remain endearing in a show that includes physical and psychological abuse and death by drug overdose. But you have to bury your social conscience and political correctness when you enter. Nothing here is taken too seriously; it’s all just in wacky fun.

Sittichai Chaiyahat is adorably inept as the hapless, klutzy plant-lover Seymour, taking outstanding pratfalls. Cashae Monya is a wide-eyed hoot as Audrey, and Melissa Fernandes makes for an amusing tippler as Mushnik. Philip David Black is hilarious as Audrey’s sadistic dentist boyfriend and a bevy of other comic characters.  Eboni Muse brings the deadly plant to humorous, ominous, ultra-over-the-top life.

The New Yorkese comes and goes for everyone, and some of the references, like Levittown and “Father Knows Best,” are decidedly dated. But Knox keeps the pace sprightly, and adds some comical stage business. The harmonies are strong, the 5-piece offstage band sounds great, and the lighting is inventive.

In this lively spoofy horticultural horror-show, the botanical takeover looks a lot better than zombies.