“THE LIGHT IN THE PIAZZA” from CCAE Theatricals 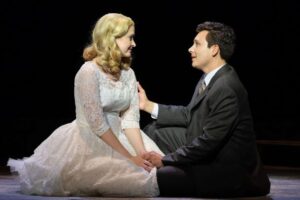 “The Light in the Piazza” is all about passion:  the thrill of finding it in first love, the willingness to fight for it in the middle stages of a conjugal coupling, the despair at feeling it’s gone forever in a long-term marriage.

The six-time Tony Award-winning 2005 musical, based on a 1960 novella by Elizabeth Spencer, is set in 1950s Florence (and briefly, Rome), the heartland of emotional extremes.

Rapture, anger, jealousy and disappointment are fervently expressed — in heated Italian, in broken (and fluent) English, and in song.

And yet, in the production at the new CCAE Theatricals, at the California Center for the Arts in Escondido, the ardor feels somewhat muted, tamped down. There’s a sameness to the emotional tone.

That’s not to say that the singing isn’t superb (it is).

The piece itself is tricky — it veers from typical musical fare into the realm of the classical and operatic. There’s a good deal of breaking the fourth wall, to speak and explain the action (or backstory) to the audience. In one case, the narrative comes from a woman (deftly played by Debra Wanger) who talks to us in English, though she can only speak Italian in the show.

Mostly, though, it’s Margaret who converses with us, giving us her conflicted feelings and her family’s background.

A North Carolinian, she came to Florence on her honeymoon, some 30 years ago, when passion was flowing.

Now she’s back, with her 26 year-old daughter, Clara — but not with her husband, who’s too busy climbing the corporate ladder in the cigarette industry.

Margaret wants Clara to see and do all the things she and Roy experienced before. She wants to recapture her own early euphoria for the place. She reads Clara the history of all the buildings and statues and paintings and ruins.

But Clara is more taken by the light… and the piazza, the main square where she meets and falls for handsome and charming young Fabrizio Naccarelli.

Margaret is enormously overprotective of Clara who, emboldened by a new, deep, mutual love, is straining at the reins and ready to break away. But Margaret is wary, to say the least.

As Margaret reports, when Clara was 12, she had an accident and head injury that caused her to be educationally and emotionally delayed. Her father calls her ‘handicapped.’ Her mother reluctantly admits (and Clara overhears) that she’s ‘not normal.’

Clara tends to have meltdowns when she’s lost or confused (though important to the story, these are significantly underplayed in this production).

Marriage is in the offing, but Margaret is having a hard time letting go — or telling the Naccarelli family the truth about Clara. It doesn’t seem to matter; they adore her.

Despite the language barrier, Fabrizio is able to communicate perfectly with Clara, and see her for who she really is. And isn’t that the real definition of love?

Nancy Snow Carr does an admirable job as Margaret, and she’s in excellent voice.

As Clara, Madison Claire Parks has a delightful and delighted way about her. She also has a strong soprano voice (there’s a plethora of sopranos here).

Nigel Huckle, one of the touring Ten Tenors, is endearing as Fabrizio, and John La Londe, with his commanding baritone, is potent as Fabrizio’s father.

The cast of 15 makes beautiful music, as does the outstanding 15-piece orchestra, under the baton of Lisa LeMay.

The score, with music and lyrics by Adam Guettel, son of musical composer Mary Rodgers and grandson of the great Richard Rodgers (of Rodgers and Hammerstein fame) is quite challenging,  lushly orchestrated but not always melodic. The book, by Craig Lucas  (“Prelude to a Kiss”), relies heavily on telling when it should be showing.

But when I saw the original production at Lincoln Center, I was gobsmacked, smitten with emotion. In 2008, Lamb’s Players Theatre did a lovely job with the piece.

But this time, I just wasn’t swept away. The show was very well designed and performed , but it kept me at a remove; I didn’t feel it internally like I had before.

I was certainly awed by the production values — a stunningly changing set (designed by Joe Holbrook), with its pillars and arches and giant statue of Michelangelo’s David.

The lighting (Nick Van Houten) is gorgeous. The sound (Jon Fredette) is sharp and the costumes (Janet Pitcher) are era-appropriate and varied, if not always flattering.

Overall, I could say I liked everything about this production — but I wanted to fall in love.