“IRON” from The Roustabouts Theatre Co. 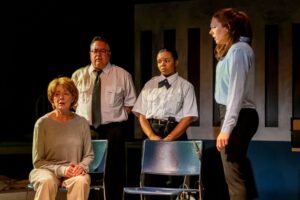 Comedy isn’t the only escape.

In tough times, a well-done drama can take you out of your head just as well, plunking you into a different place and stimulating your brain and imagination instead of your funnybone.

In Rona Munro’s “Iron,” the place is a women’s prison in Scotland. It’s bare bones and claustrophobic (though there’s a bit of greenery and blooms in the spartan outdoor areas).

The title may refer to the confining bars, the wills of the folks we meet inside, or the stone-sharpening potential some inmates use as an escape hatch.

Fay (Rosina Reynolds) is a lifer, in for the murder of her husband.

Her 30 year-old daughter, Josie (Kate Rose Reynolds) hasn’t seen her since she was taken away 20 years ago.

Suddenly Josie shows up at the prison, naively unaware of the security checks, protocols and paperwork required before any visit.

Josie is lost, directionless. She was raised by her Gran (her father’s Ma), who died not long ago. She’s been drifting from job to job, country to country, including the U.S. (San Diego, no less).

What she’s looking for now is connection, roots, and most of all, some memory of her father. She seems to have none.

These women, as alike as they seem (the actors are, after all, real-life, ginger-haired mother and daughter), they barely know each other.

Fay has lots of memories, and gradually, she begins to share them — though she’s much more interested in living vicariously through the divorced Josie’s drinking, dancing and dating forays (which are, in fact, non-existent).

The one memory she refuses to talk about — and did the same at her trial — was the act that got her incarcerated.

As the story slowly and methodically unspools, we see how similar these two are, especially in terms of their temperament, temper, volatility and potential for violence (thanks to credible fight choreography from associate producer Ron Christopher Jones).

Director Jacole Kitchen keeps ramping up the suspense, and we keep re-thinking what we imagine the denouement will be.

This is a four-person ensemble, and each character gets some revealing, even dramatic moments.

But the burden lies mostly on Reynolds Senior, who is magnificent, ranging from aggressive to catatonic, tender to tearful to vicious. Fay has a strong spine — and memory, and also a huge capacity for love.

The younger Reynolds holds her own wonderfully. Josie gives as good as she gets from her mom, and reveals her own perspicacity and perseverance.

Trujillo, the artistic director of the San Diego School of Creative and Performing Arts, is making a very welcome and satisfying return to the stage, an excellent counterpoint to Owens, a current graduate student at UC San Diego (in the MFA, Acting program).

The play, commissioned and first presented in 2002 by Traverse Theatre in Edinburgh, Scotland, has both harsh and poetic language — not to mention heavy Scottish accents, deftly handled by all.

It teaches us more than a bit about what being on the inside might actually be like — for prisoners and guards.

And it gives us so much about the tough, powerful bond between a mother and daughter.

Minimally but effectively designed (set by Tony Cucuzzella, lighting by Michelle Miles, sound by Paul Durson, costumes by Pamela Stompoly-Ericson), the piece is intense and riveting.

This potent production certainly sends you away with something (else) to think about.