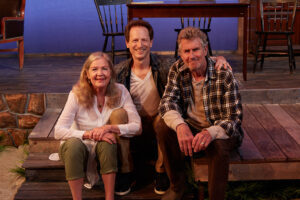 Getting older, and weaker of mind, body, memory and spirit: if it hasn’t hit us or our parents yet, it will.

No one escapes the final curtain; it’s just about how slowly and painfully it comes down… and who gets to decide when.

It’s always hard on the family.

Gunner’s wife, Peg, and their 50 year-old son, Jack, are having a particularly tough time when Gunner goes back to the past, repeats himself endlessly, or forgets who they are.

In his younger, spryer days, Gunner was a hard-nosed Philadelphia teamster. He’s still trying to control what his family does. And he still says rough and hurtful things. Most of all, he doesn’t want to wear a diaper or be an embarrassment. But he refuses to even look at the brochure for a care facility Peg keeps pushing at him. (“It’s like a roach motel: you check in but you don’t check out,” he says).

Both parents have always told Jack massive untruths (“Santa Claus steals toys,” “I know a boy who died doing that”), and they’ve always shoved him in the middle of their arguments. They’ve both told him secrets and admonished him not to tell the other parent.

Even in the midst of a divorce, and one very difficult son of his own, this may be the most challenging, no-win situation Jack has ever been in.

The tide turns repeatedly in Bruce Graham’s 2011 drama, “The Outgoing Tide,” which leaps back and forth in memory and time.

In the present, we’re on Marty Burnett’s lovely Chesapeake Bay homesite, replete with sand and stones (Jack keeps trying, and failing to skip the stones), with Fieldstone walls, shake shingles and a woody interior (with an oddly vacant back wall that provides a canvas for Matt Novotny’s often hot pink lighting. His water reflections from the Bay are beautiful, though).

Aaron Rumley’s sound design, with its ripples, birds and buoy bells, immerses us in this outwardly peaceful but internally contentious and conflicted environment.

Everyone just wants to be seen and listened to. Each character has spent a lifetime compromising, jettisoning dreams and putting off aspirations. And now, they’re all faced with the ultimate choice: how to end a life with dignity.

Under the assured direction of Nike Doukas, each of the three skillful actors carves out an authentic, thoroughly credible character.

Andrew Barnicle is funny but insensitive as the proud, gruff and controlling Gunner, who toward the end, lets slip a few of his regrets about the way he’s treated his son.

Leo Marks is caught in a web of problems at his own home and his parents’, still mired in the ambivalence of his parent-child relationships, and on the path to repeating some of his father’s worst behaviors.

It’s a gut-wrenching story, filled with searing questions and aching decisions. The kind of fears and decisions that have to be made by many families — before someone wanders off irretrievably, or inadvertently sets the house on fire.

You’ll get some laughs here, for sure (if you don’t mind the politically incorrect jokes). But you’ll also be forced to consider your own end-of-life decisions — and those of your family.