“THE LAST SHIP” at the Ahmanson Theatre in Los Angeles 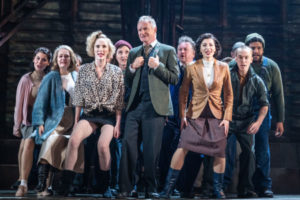 The story may be set in the North East of England, but it’s a familiar one in this country, too.

The music and lyrics for “The Last Ship” were written by 16-time Grammy-winner, Sting, inspired by his own childhood in the shipbuilding town of Wallsend.

The shipyard, the only work option in this industrial heartland town, is about to be closed — another victim of Prime Minister Margaret Thatcher’s anti-union policies. The sad tale is reminiscent of the crumbling mining town of another musical, “Billy Elliott.”

How many American mines, factories or other heavy industries have been shut down, virtually destroying a community and a way of life?

After a short-lived run on Broadway in 2018, the musical, also inspired by Sting’s 1991 album, “The Soul Cages,” was substantially re-conceived. Its book — originally written by heavy-hitters John Logan (“Red”) and Brian Yorkey (“Next to Normal”) — has been re-written by new director Lorne Campbell.

By all accounts (not having seen the Broadway production), the story is now more straightforward, with fewer characters and complexities. The revised version, which toured the UK and Ireland in 2018, and had a six-week run in Toronto early in 2019, took on a new performer in the central role: Sting. (He briefly appeared on Broadway, too, to help increase business and extend the run).

The production, with a good deal of its 18-member cast intact, begins a U.S. tour that launched in Los Angeles at the Ahmanson Theatre and is scheduled, thus far, for three more cities.

In addition to the shipyard community plotline, there’s a love story baked in.

A sailor named Gideon Fletcher, returns home after 17 years at sea. He expects to find his hometown and Meg, the love he left behind, unchanged. Neither turns out to be the case.

Anger and resentment are rampant… in the townsfolk and in Meg.

In an effort to ward off the shutdown, a strike is called, which prompts the shipyard owner to threaten the workers. The foreman, Jackie White (Sting), rallies the men, encouraging them not to cave to pressure to dismantle their final, unfinished ship for scrap. Instead, he forcefully advises, the workers should take over the shipyard and complete the building of this one last ship (ironically named “Utopia”).

In a potent display of force and solidarity, the women step forward and join the act of defiance.

The Tony-nominated, Irish-inflected score, rife with ballads and anthems, features songs from Sting’s concert album, “The Last Ship,” and a few older favorites: “Island of Souls,” “All This Time,” and “When We Dance.” All fit the mood of the piece, but some fit the story better than others.

The plot is compelling, and disturbingly real (except for the ending, which is completely fanciful, if emotionally satisfying).

There are a number of local “characters,” perhaps too many for us to really latch onto. But the narrative arcs of the ailing Jackie (his lungs have been destroyed by mesothelioma, an occupational hazard) and his wife, Peggy; and the waxing/waning relationship of young and older Gideon and Meg, are effective.

The ensemble is excellent. Despite the strong Tyneside accents, it is, in fact, Sting who is often the most difficult to understand. The differences between a trained musical theater performer and a stadium-playing musician become blatantly evident; Sting’s enunciation is considerably less precise.

His acting is convincing, though (he has appeared in more than a dozen movies) and he creates a credible character (the death scene, however, is totally implausible as staged). But he is rather stiff onstage; he barely moves, and strikes one pose — hands clasping sports jacket lapels — throughout the show.

The movement is a major problem here. While the Broadway production featured the choreography of Olivier and Obie Award-winner Steven Hoggett (a three-time Tony nominee), the touring show is hamstrung by silly, pointless unison hand gestures and minimal footwork (Lucy Hind is the “movement director”) that are either intrusive or unsuited to the sentiment of the song. There is little actual dancing, but there’s frequent foot-stomping, an expression of occasional joy, and more frequently, anger. There is, however, lively, spontaneous, pre-show improvisatory dancing by the cast, which is delightful.

Having one shipyard worker, Adrian (Marc Akinfolarin) be an egghead who spews quotes from classic literature, seems like an odd and not wholly believable addition.

But what is believable — and magical — is the atmosphere established by the stunning design and projections (59 Productions). The lighting (Matt Daw) of the metal bi-level set contributes mightily. The church scene is especially beautiful. And the dark, rolling, omnipresent clouds perfectly symbolize the somber tone of the piece.

Despite the changes, the show still doesn’t seem to be in a final, fully lovable form. Yet it’s moving, heartbreaking and at times (cf. the implausible ending) inspiring.

Even if Sting should probably stick to his day job, it’s a treat to see a music superstar take to the musical theater stage with heart and conviction, to pay tribute to his hometown, his heritage and his history.