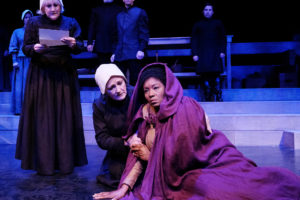 As perfect a pairing as brie and baguettes: Lamb’s Players Theatre and “Babette’s Feast.”

In 2018, the Academy Award-winning 1987 Danish film based on a short story by Isak Dinesen (pen name of Baroness Karen Blixen) was adapted as a stage play.

Conceived and developed by playwright/actor Abigail Killeen and written by Rose Courtney, the play hews closer to the original story, first published in the Ladies Home Journal in 1950, than the movie. It premiered at Portland Stage in Maine and had a brief Off Broadway run in 2018.

The fable-like tale concerns grace and gratitude, faith and art. Founded on principles of spirituality, Lamb’s is just the right fit for the play’s themes and structure: a presentational story-theater style, with a versatile ensemble taking on the narration and multiple characters.

Under the inventive and sensitive direction of producing artistic director Robert Smyth, eight potent performers convey the high- and low-born, siblings and adversaries, even (in the case of Omri Schein) crossing gender boundaries, which provides comic relief.

We feel the cold of the remote, austere Norwegian coastal village and its equally austere populace, led by a rigid, puritanical ascetic.

His two daughters are devout followers of his sect, and abjure marriage to carry on his teachings.

But when a stranger appears at their door, a French refugee who lost everything in the civil strife of the Paris Commune of 1871, the good-hearted sisters welcome her into their home, happy to grant her asylum. Though they cannot afford to pay her, she gratefully becomes their maid and cook, cooking the simple, unadorned fare they stipulate: split cod and bread-and-ale soup.

After a dozen years of faithful, near-silent service, Babette offers to create a French meal, to celebrate the 100th anniversary of the birth of the late patriarch. The entire community is invited.

Something magical ensues, not only a meal literally fit for a king (including stuffed quail, turtle soup, caviar and fine champagne), but something much more enduring.

The townsfolk, in their self-abnegation, refuse to enjoy the extravagant repast. They believe that “luxurious fare is sinful.” And yet, they are transformed and healed by it. Arguments are forgotten; alliances are re-formed.

Spirituality is augmented by artistry. The feast is about an artist subdued, yearning to do what she’s meant to do. It’s also about embracing the joy of living in the present, rather than sacrificing all pleasure for the hereafter.

Despite what she was (which is gradually revealed), and the spare circumstances into which she finds herself, Babette is content, asserting that “an artist is never poor.”

Yolanda Marie Franklin gives Babette a quiet, steely grace (though her French is a bit shaky). Working upstage to create the meal (without any real food in evidence), she convinces us that something both mundane and otherworldly is taking place.

Periodically, there is splendid choral singing by the talented cast. But a standout moment of sheer musical bliss occurs when a renowned French opera singer takes refuge in the isolated village and, hearing the glorious voice of one of the sisters, offers to give her singing lessons.

Those lessons, performed exquisitely by husband and wife Charles Evans, Jr. and Caitie Grady, are nothing short of heavenly. Grady displays the operatic voice of an angel, and Evans’ rich baritone magnificently complements her crystalline soprano, in unfamiliar melody and harmony or in excerpts from Mozart’s “Don Giovanni.” Truly divine.

Grady and Rachael VanWormer (whose character also turns away a devoted suitor – sharply portrayed by Ross Hellwig in his youth and Rick Meads in later years) are excellent and affecting as the somber sisters in their younger years, yearning for something more, but holding themselves back. Deborah Gilmour Smyth and Kerry Meads bring dignity and gravitas to their older incarnations. And Jason Heil is pitch-perfect as the stern paterfamilias (and others).

The costume changes (Jemima Dutra) are minimal but highly effective. The lighting (Nathan Peirson) spotlights brilliantly (even a bowl of soup). The sound (Patrick J. Duffy) is crisp. Underscoring it all is celestial original music composed by music director Gilmour Smyth, marvelously and expressively played by cellist Diana Elledge.

The play manages to be transporting for the audience as well as the characters. The sumptuous descriptions of the food make you feel like you’ve had a seat at the table, too.

And hopefully, in these xenophobic times, the felicitous outcome of accepting and welcoming The Other, the stranger, the refugee, will leave an enduring impression.