“GOING TO A PLACE WHERE YOU ALREADY ARE” at OnStage Playhouse 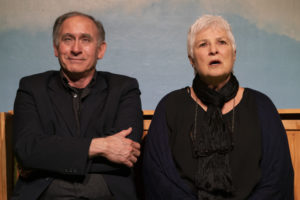 Aside from politics, death and religion are supposedly the two subjects you don’t bring up in polite society.

But those two loaded topics course through Bekah Brunstetter’s plays, two of which have been seen in San Diego (“Cake” at La Jolla Playhouse, “Be a Good Little Widow” at The Old Globe).

Her 2016 fantasy/dramedy, “Going to a Place Where You Already Are,” leans heavily on religion and mortality.

Joe and Roberta have been married for 29 years. Now, when they’re “medium-ish old,” according to Joe, they find themselves attending more funerals than weddings.

When we meet them, they’re in a church pew, sniggering at the eulogy. Joe is an unequivocal atheist, a man committed to science and reason. Roberta has some doubts about religion, God and the afterlife. She says, “Church makes me want to vomit – and cry.” But also thinks that, after death, we “look down  on our bodies” and on those mourning us. When you see the tears, that makes it all worth it.

In the aftermath of an allergic reaction to the dye in an MRI, Roberta is convinced she made a trip to heaven. It was a pretty terrific place, she reports, with all her favorite foods in abundance, and air suffused with memory-triggering scents.

Joe has 100 medical explanations to justify his disbelief in her story, and he’s in complete denial about her dire diagnosis and impending death.

But the Angel who greets her up there keeps hanging around, though only she can see him, and only some of the time. He even visits Joe’s granddaughter, Ellie, a millennial who wonders about God (“What if he’s real and you don’t believe in him?”), is a closet smoker and workaholic (“I don’t have the luxury of free time”), and has grave doubts about her being a “good person” with a bona fide moral code and an ability to feel or express emotion.

Ellie has just met a man who totally gets her, and is intuitive about who she is and how she feels. But his disability makes her “uncomfortable.”

The play charts a course of gradual acceptance in both couples.

Brunstetter is a master of genuine, moving and touching dialogue. The otherworldly elements add another layer to the piece. There’s plenty of humor here, but the subjects are, of course, deadly serious. With her long-term experience writing for TV, it’s her laugh-lines and surface consideration of solemn subjects that keep her plays from achieving depth and gravitas.

She indulges her fantasy more in this one, and though it isn’t deep, it provokes self-evaluation and contemplation.

Local actor/director Hannah Logan fell in love with the play, and brought it to James P. Darvas, artistic director of OnStage Playhouse in Chula Vista. In his new position, he’s happy to produce provocative work.

As director, Logan has assembled an excellent, committed cast. She publishes a socially sensitive apologia in her Director’s Notes, lamenting that, despite desperate and extensive attempts, she was unable to find an actor with a disability to play the role of Jonas. She found someone one step removed, who had experience with a disabled friend (Ironically, the actor Logan had originally cast, but she recommended him for another role in another play, which he snagged).

Happily, Miguel Góngora, Jr. does an excellent job of conveying the challenges of disability, and the dark humor that often accompanies it. Though he’s a compassionate man, Jonas assures Ellie that having a disability doesn’t make him a saint. He gives her several examples to prove he’s no angel.

Speaking of Angels, Patrick Mayuyu has a wonderful presence as the celestial one, deploying his skills in singing and dancing (love the Fosse moves!) to convey his lightness of being.

Richard Rivera and Jody Catlin are potent, endearing and thoroughly credible as a long-standing and devoted couple. He’s solid and believable, and his breakdown, when he finally faces reality, is heartbreaking. They had planned to ‘go’ together. Now there’s the question of whether, without faith, he’ll get to be with her in the afterlife at all.

Catlin, who has New York, Shakespeare Festival and film credits, is a bit snarky in the first part of this 90-minute one-act. But when she gets to heaven, she’s like Scrooge on Christmas morning: transformed into a lighthearted, giddy, eternally grateful soul.

As Ellie, Heather Warren reveals believable obsessions and vulnerabilities, insecurities and self-berating. But also an ability to listen and learn.

The set (Ron Logan) is whimsical; the sound (Matt Warburton) and lighting (Quinn Schuster) capture the fanciful nature of the piece.

The play is entertaining, if not highly nuanced. The title makes it clear that you probably don’t recognize or appreciate how good you’ve got it. Enjoy it while it’s here.