“MATILDA THE MUSICAL” at Coronado Playhouse 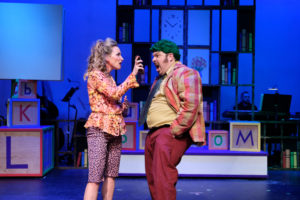 She may be only 5 years old, but she knows a thing or two about revenge — and a lot about being “a little bit naughty.”

She goes after her conman father and her monstrous headmistress. But if you’re good to her, like her aptly named teacher, Miss Honey, she just might give you back your life.

The source material, the much darker children’s book, was written by Roald Dahl in 1988. It became a beloved film in 1996, and in 2010, the story was transformed into a stage musical with book by Dennis Kelly and music and lyrics by Tim Minchin. The show won multiple awards in London and New York.

Now, the plucky community theater, Coronado Playhouse, has taken on the huge challenge, featuring a hot six-piece onstage band and a huge kid-and-adult cast of 22.

There’s lots of talent on display, and skillful musical director Nina Gilbert has made sure that every English-accented word is understandable — no mean feat, since the national tour that stopped at the Civic Theatre in 2017 was virtually incomprehensible.

Director Rayme Sciaroni and choreographer Alyssa Anne Slagle have done a fine job. The production is amusing and engaging.

Sharing the title role, 13 year-old Reese McCulloch, a veteran of “The Grinch” at The Globe, is delightful as smart, wily, book-loving, love-starved, telekinetic Matilda.

The design and tech work are functional, though some of the set pieces are moved around too much.

The show, which highlights the power of imagination and the anarchy of childhood, comes with a last-minute warning to kids, from the nasty anti-intellectual Mr. Wormwood, Matilda’s goofball dad: ‘Don’t try this at home,’ he says, referring to reading books.

The humor here leans toward the adult. But if your young’uns can place their tongues similarly in their little cheeks, this could be a really fun family affair.