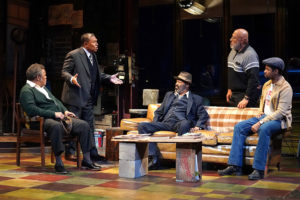 August Wilson was a Gem of the Ocean, to borrow the title of one of his iconic plays. In his “Century Cycle” (also known as the “The Pittsburgh Cycle”), he chronicled the lives of African Americans in the 20th century, decade by decade. Almost all were set in the economically depressed Hill District of Pittsburgh, where he was born.

It was not one of the two plays that earned him the Pulitzer Prize for Drama (“Fences” and “The Piano Lesson”). And it isn’t one of his most potent. It has less of the signature poetry and musicality that dominate Wilson’s other plays. Nonetheless, in the early 2000s, “Jitney” was deemed Best New Play both in London and Off Broadway.

The 2017 Broadway production won a Tony Award for Best Revival of a Play.

It’s that production (including much of the creative team and five of the eight original actors), helmed by Ruben Santiago-Hudson, that is currently on a five-city national tour, and has stopped for a spell at The Old Globe where, years ago, three of Wilson’s plays premiered.

Set in 1977, the piece concerns similar issues as Wilson’s “Two Trains Running.” In both plays, long-established local businesses in the Hill District are facing extinction due to social change, as the city and its Pittsburgh Renewal Council prepare to demolish buildings in the name of “urban renewal” and gentrification.

Here, the business is an unlicensed cab company (a jitney cab station or “ride service”), which has been catering to the local community for 20 years. They’ve just been given two weeks’ notice that the place will be boarded up and at some undetermined point, torn down. Other storefronts, the men note, have been boarded up for years without demolition.

Becker (Steven Anthony Jones) is the popular upright, rule-bound boss-man. Like others on his team, he can be explosive, but he has kept the group together and the enterprise active. Now, he has a plan for the men to stand their ground.

At The Globe, the first glimpse of the Shiley stage at the Globe (set designed by Tony Award-winner David Gallo) reveals a cutaway of a shabby shop, teeming with 20 years’ worth of accumulated stuff, including layers of pictures taped to the walls and the grimy fridge, battered furniture (Anthony Chisholm’s alcoholic Fielding hides bottles under the sofa cushions) and a pay phone where ride requests come in and the flamboyant local bookie, Shealy (Harvy Blanks), runs numbers.

Outside the large, grimy, reflective windows looms an industrial city: a backdrop of tall buildings and telephone poles, and a full-size beat-up car waiting to be put to use.

Turnbo (amusing Ray Anthony Thomas) is the gossip who seems to be into everyone’s business; he has an ongoing, pugnacious conflict with Youngblood (Amari Cheatom, last seen, effectively, at The Globe in “Skeleton Crew” in 2017), the most junior driver, a Vietnam vet who’s trying to re-fashion his formerly profligate life, and is having issues with his girlfriend and baby-mama, Rena (Nija Okoro), the only female in the play, who has a minor — and not always female-flattering — role. But she is a fierce defender of her young child, and is hellbent on making a better life for him. Turnbo stirs up trouble by saying that Youngblood is cheating on her, but Youngblood has bigger, more ambitious plans in mind.

A total of eight men enter and exit the station frequently, lamenting the demise of their neighborhood, each struggling with issues of love, money, loss or regret, as they exhibit a strong sense of kinship (and humor) and try to keep their lives and their community afloat.

The play gets off to a slow start. A lengthy musical intro sets the tone with a bluesy jazz number that extends too long. When it ends, we see several of the guys having over-exaggerated interactions that establish a fussy, heavy-handed directorial style.

Santiago-Hudson comes into his own in Wilson’s powerful ‘duets,’ taut two-person ‘arias’ that are gut-wrenching and illuminating. This is especially true of the incendiary scenes between Turnbo and his just-released ex-con son, Booster (Francois Battiste) and the truth-revealing moments between Youngblood and Rena.

Every Wilson play is a glimpse into an African American world and worldview that not many whites are privy to. Sometimes, in this production, the characters veer toward caricature. But the vision, insights, language and acumen of the playwright transcend all.