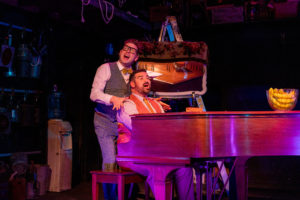 I’ll do the math:  It all adds up to one wacky, manic mystery.

“Murder for Two,” by Joe Kinosian (book and music) and Kellen Blair (book and lyrics), premiered at the Chicago Shakespeare Theatre in 2011. It had an eight-month run Off Broadway in 2013-2014. In 2015, it arrived at The Old Globe, with composer Kinosian playing the ten eccentric suspects.

Now, the music-infused mystery has come to New Village Arts in Carlsbad.

Director AJ Knox, who knows his way around a madcap farcical comedy (his “Avenue Q” at New Village Arts in 2018 was a knockout), is clearly having a field day with this one, as is his multi-talented duo of a cast. Same goes for music director Tom Abruzzo and choreographer Jenna Ingrassia-Knox.

Officer Marcus Moscowicz (JD Dumas) is dying to become a detective. When the real detective on his force is off on other business, Marcus is happy to be the first to take the homicide call. (Dumas also plays a couple of his co-workers).

Once he arrives at the home of Great American Novelist Arthur Whitney, who was shot in the head as he entered the house for his birthday surprise party, things get wonky. And that’s when Tony Houck gets going (although the two did play piano and sing together for the show’s “Prelude”).

Houck plays the ten class-spanning suspects in the murder case, from the wily, put-upon wife to the Freudian German psychiatrist, to a seductive ballerina, a feuding neighbor couple, a hyper-inquisitive niece who’s a wannabe detective herself, foisting herself on Marcus, begging to become his partner and help solve the crime; and  three little tough kids who’ve seen “A Lot Wois” than any of the shenanigans going on in this domicile.

With minimal props or costumes, Houck switches from one character, gender, accent and demeanor to another with antic aplomb, repeatedly conducting conversations among them, while singing songs, dancing, and racing back and forth to the piano — so Dumas can get in some singing, too.

It kinda makes your head spin (imagine what it’s like for them!).

This is an actor/musician’s showcase for sure — and these guys are certainly up to the task.

The show is not only meta-theatrical and self-referential, it makes hilarious allusions to other musicals (“Chicago” and “Wicked,” for example), mentions local theaters, and constantly breaks the fourth wall.

When Marcus’ phone goes off, Houck blames the audience for bad theater etiquette. At one point, a  spectator is even called up onstage to play another victim.

It’s especially funny watching them out-maneuver each other as they tickle (or bang) the ivories simultaneously — whether they’re positioned adjacent, behind or intertwined.

You might feel a bit of whiplash by the end — just from watching Houck go through his hyperactive hijinks without breaking a sweat.

You will laugh as you marvel, and you’ll appreciate the winks, nods and elbow-jabs at classic stage and TV comedies and murder mystery novels.

Sure, it’s silly. But couldn’t we all use a nice, complex, goofball murder case to distract us from the even-more grisly happenings in the world around us?