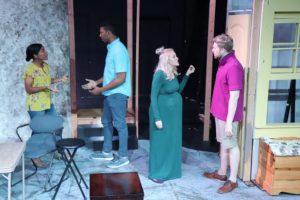 Some plays with a socio-political edge speak to their time. Some get edgier over time.

Playwright Bruce Norris attempted to continue the racial discussion about integrated housing, white flight and gentrification by setting his play in the same house, over two time periods: 1959 (when “A Raisin” takes place) and 2009.

Here, we meet the white family who has just sold their Chicago house to the African American Younger family from Hansberry’s play. And we see the pressure from the community to dissuade the black family from moving in.

In the second act, 50 years later, we find a black family, still steeped in the long, checkered history of the house, having sold the place to a white couple.  The new buyers are moving into the black neighborhood and intending to tear down the place (and its history) to create a much bigger domicile (possibly a monstrosity and an eyesore on the block). It’s a recurring consideration of race vs. real estate, privilege vs. community.

I’ve never been a fan of Norris’ play, though it won a Pulitzer Prize and a Best Play Tony.

But it seems to have grown more pointed over time.

Now, it’s easy to see not only the racial stereotyping and inherent prejudices — on both sides — but also a significant layer of misogyny and what we now call #MeToo moments, as the men repeatedly try to talk over the women and silence their wives. And these women are no pushovers.

So the experience, while not delving deeply into one family’s dynamics (like Hansberry’s play effectively does) seems richer and fuller than it was.

This is, in part, due to a potent but bare-bones production from the plucky Trinity Theatre Company, a still-burgeoning, under-the-radar group started in 2012 by founding artistic director Sean Boyd — when he was still in high school.

Under the direction of Kandace Crystal, the confrontations are intense without being preachy or shrieky. Multiple sides are presented, each character gets to have a forceful say, and a game and compelling cast of seven (each playing two roles) makes the arguments clear, convincing and persuasive.

Of course, what’s striking is that we haven’t come all that far since Norris’ play debuted… or Hansberry’s, for that matter.

The production is well worth seeing, because it’s bound to engender a provocative conversation.