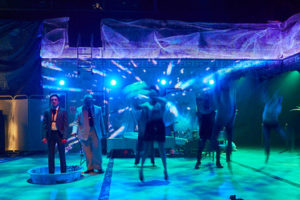 VENUE: UCSD at the Potiker Theatre

There isn’t a problem, concern or crisis in our divisive current culture that doesn’t make its way into “Orestes 2.0.”

Playwright Charles Mee wrote his adaptation of Euripides 408 B.C.E tragedy in 1991, during the first Gulf War, and it’s now being presented, in all its gory glory, at UC San Diego.

This is the third part of Mee’s ‘Imperial Dreams’ trilogy. He considers this to be “The Euripides after-war play, re-set in the world today,” in which the veterans return from battle (the Trojan War standing in for every ensuing combat quagmire), only to find that “the disorder and nightmare of war has come home with them and rendered their homeland to ruins forever.”

The story hews close to the classic: Orestes, of the doomed House of Atreus, has murdered his mother, at his sister Electra’s urging. Their monstrous mom, Clytemnestra, had just killed her husband/their father, Agamemnon. Now, Orestes and Electra are condemned to death.

But first, they’ll plead their case to their uncle Menelaus, the army general and husband to the ship-launching beauty, Helen (Clytemnestra’s sister), whose extramarital affair prompted the Trojan War.

Menelaus is returning from the conflict victorious, but he refuses to help his niece and nephew, and things go from bad to worse for them.

But in the end, Apollo appears (deus ex machina, y’know) to wrap everything up tidily (2000 year-old spoiler alert: both Orestes and his sister will live).

The bones of the story are there, but Mee has borrowed ‘found text’ from such diverse additional sources as William S. Burroughs, Apollinaire, Vogue magazine, astrology columns and Soap Opera Digest. “2.0” is a wild and unruly beast.

There’s also a Tapemouth Man who resembles Hannibal Lecter, with his menacing face-mask and hyperverbal disquisitions on the long history of grisly violence and product liability.

The likelihood of a “fair trial” (a familiar news-phrase of late) is slim. Every distortion of culture and governance that we’re experiencing at the moment is touched on in director Joseph Hendel’s tempestuous fever-dream of a producton.

The sensory overload includes a cacophony of simultaneous voices, ultra-bright lights, ear-piercing sounds, voiceovers, projections and a TV broadcast, all woven into the plots and counter-plans, coupled with nihilism, narcissism, hypocrisy, trauma and mental illness.

The set (Miranda Friel) is equally chaotic, including a row of hospital beds and stage-left, a mountain of detritus (chairs, a kiddie pool, full-sized porta-potty that gets some use, etc.) and for the Tapemouthed Man, a kind of dunce-capped, mobile electric chair. The costumes (Natalie Barshow) are correspondingly riotous.

The result is frenetic and sometimes acrobatic (a movement practice facilitator and a fight/intimacy choreographer are listed in the program). Some of the themes (and possibly, some of the original storyline, if you’re not familiar with it) can get lost in the melee, but what’s crystal clear is the skill level of the undergraduate and grad student actors.

The 15 performers are outstanding: vocally, physically and dramatically. They clamber, climb and cavort (Lois Shih is especially agile) and they sing. The music (sound design by Stephen Jensen) spans an unusual gamut from Beethoven to Karen Carpenter.

All told, this is a circus of philosophical and political ideas, conveyed through intense theatricality and physicality that is breathtaking in its inventive ferocity, if not always crystalline in its messaging.

But this production is teeming with refreshing, youthful energy. It’s no wonder the piece is most often presented on college campuses.

UCSD brings back the essence and spirit of the late (aptly named) Sledgehammer Theatre, which itself was born of UCSD students.

Hail to all challengers of the endless cycle of war, violence and ethically-barren leaders!