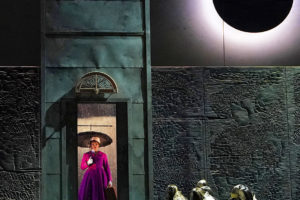 Some stories are timeless, and some stage pictures are iconic.

The L.A. Opera has combined the two with a stunning world premiere production of “Eurydice.”

The ancient Greek myth of Orpheus and Eurydice has been re-interpreted in countless ways, from poetry to video games.

Perhaps no retelling is as affecting as the 2003 play by Sarah Ruhl which tells the tale from the woman’s perspective.

Eurydice is about to wed Orpheus, a man with extraordinary musical gifts, whose song can make even stones cry.

On the day of their wedding, she suddenly dies. Completely devastated, Orpheus vows to go to the Underworld and retrieve her. He makes the harrowing journey — and a deal with Hades, lord of the Underworld:

Orpheus can lead her out, as long as he doesn’t look back at her. But he does look back, and she dies a second time.

Ruhl wrote her terrific play shortly after losing her father. So she gave Eurydice a heart-rending reunion in the Underworld and a moving reinstatement of the seminal father-daughter relationship.

This puts Eurydice in the position of having to choose between her husband and her father — whether to stay or go.

Ultimately, tragedy is heaped on tragedy, and the outcome can’t help but break your heart.

The result is gorgeous to behold.

The design and direction are superlative. The libretto is lyrical and slyly humorous. The singing is outstanding. Most of the vocal work is recitative, but some of the instrumental sections, under the baton of the composer, are exquisite.

The iconic image comes when Eurydice arrives in the Underworld. She takes an elevator down, and emerges in a rainstorm, immersed in the waters of the Lethe, river of forgetfulness.

What’s important for you to remember is that this glorious piece will be produced by the Metropolitan Opera in New York next year. So there’s a good chance it’ll be coming to a movie theater near you, via the Met’s ‘Live in HD’ series.

This is an event that music, theater and mythology lovers will not want to miss.