“A KIND OF WEATHER” at Diversionary Theatre 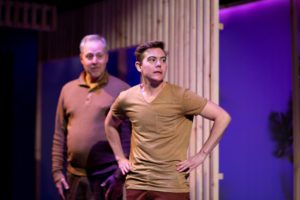 Fathers and sons. They’ve had a fraught relationship since Adam spawned Cain and Abel.

It may not be life and death for Grey and Kid, but there are some additional frissons in their interactions.

KId started out as a daughter. Along with his other issues of guilt and adjustment, Grey, his father, is having trouble coming to terms with that transition.

Without warning, Grey (aching Andrew Oswald) has taken a bus to Brooklyn and barged in on Kid (captivating August Forman), who’s in the process of writing another book and establishing a personal/sexual relationship with his editor, Rose (upfront, no-nonsense Andréa Agosto).

Grey is totally lost. He’s not even sure where he is. Staring at The Lake in Prospect Park, Brooklyn, he thinks he’s in Jamaica, in the cheap hotel where he and his wife loved to go. But now, his wife is gone; shortly after they split up because of his infidelity, she took sick and died rather suddenly — in that hotel in Jamaica.

Grey is grieving and guilty and bereft. He seems too far gone to make any real connection with Kid, who basically wants his father out of his life right now. It was “rude” of him to arrive unannounced, planning to park in Kid’s one-bedroom (interesting wood-slatted set by Yi-Chien Lee). Both fairly self-involved at the moment, Kid is still angry at his father, and Grey can’t begin to understand Kid’s life, his transition or his desire to write a memoir at his young age.

There are layers, complexities and intricacies in Sylvan Oswald’s intriguing “A Kind of Weather,” a world premiere at Diversionary Theatre.

Time is fluid. People and relationships are unsettled, as changeable as the weather. Each of the characters is ambivalent. Each is in a transitional position — in life, work, love or all three. No one, the point is clearly made, walks through life with absolute certainty.

Kid gives us a clue to the playwright’s thinking and process when he says, “I can’t tell a story in a straight line… only in circles or curves or shapes.” And that’s pretty much what Sylvan Oswald has done.

The play’s title comes from a description of the work of the late experimental writer Kathy Acker. The poet Robert Glück wrote that in her work, “sex is a kind of weather,” which Oswald says he “adopted to describe both the sensual content of actual weather and also the atmospheric qualities of desire.”

His descriptions of the weather are beautiful and poetic.

The award-winning, L.A-based Oswald (no relation to the actor in the play), is known for his irreverent, interdisciplinary, metatheatrical work. He plays with time and place, form and structure.

Here, as time jumps around, the actors may directly address the audience, or engage in actual dialogue, or veer off into their own dream- or fantasy-space.

Oswald is taking the next step here in the transgender narrative. This story isn’t about the transition per se; it’s already happened. But there’s lots of information dispensed, as Kid tries to explain to his uncomprehending doctor-father (“I never have to deal with them,” he insensitively tells his son”). So you’re actually likely to learn a thing or two, along with Grey.

With his sly sense of humor, playwright Oswald also injects a discussion of ‘transition’ in theater, “an orchestrated change between scenes.” But, he has Kid say, “There are no transitions here. The whole thing is all in one piece” (the play is performed without intermission). “Now, he continues,” we’re in a musical.”

And just like that, all five characters (including Rose’s ambisexual-seducer boss, Rick, zestily played by Salomón Maya, and Grey’s sensual lover, Janice, portrayed as a kind of Earth Mother by Marci Anne Wuebben), belt out their feelings, emotions and frustrations, all the while tracking time backward and summing up with “Be yourself.”

Sylvan knows what he’s talking about. He identifies as transmasculine, as does compelling Chicago-based actor August Forman, who plays Kid. The director, Bea Basso, a young, smart, accomplished actor/director from Italy who currently teaches at UC San Diego, has devoted herself to learning all she can, from various sources, including the playwright and actor, about “the ever-shifting motion that is gender.”

The result is a wonderfully distinctive, unpredictable, irresistible production that catches you up and leaves you a little flustered, perhaps, but still thinking — just like the characters.

The lust-filled moments and sexual connections are more successful and credible in the older couple than the younger. But all the performances are strong.

Oswald (the actor) and Forman are terrific together, exploring their memories and fears, doubts and insecurities. In the end, integrating past and present, they each are on the way to becoming one whole, grounded person. And in the final moment, it’s extreme weather (excellently conveyed by Joel Britt’s lighting and Maeann Ross’ sound), that forces the father to think again, and to start to see his son in a different light.