“HURRICANE DIANE” at The Old Globe 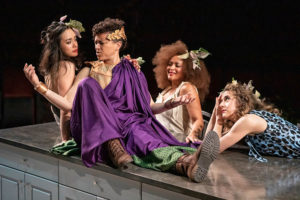 The Greeks are back at The Globe. The Greek gods, that is.

Last summer, Dionysus and the Muse Thalia made an appearance in modern times in “Ken Ludwig’s Gods of Comedy.”

Now, in Madeleine George’s “Hurricane Diane,” Dionysus returns, as a butch lesbian landscape expert hellbent on saving the planet from the humans who are destroying it.

The Greek myths were all about Fate. These two plays share an unfortunate fate: both are less-than-hilarious sitcoms.

In fact, “Diane,” with its climate change preachiness, would be better suited, in abbreviated form, to an Earth Day skit.

Sure, we could all use some comic relief these days. But this kind of lightweight/heavy-handed treatment of comedy and/or social issues doesn’t fit the bill.

The trope of gods returning has become corny and stale (cf.“Gods of Comedy,” referenced above, or the Marie Phillips novel, “Gods Behaving Badly” — similarly straining at humor — in which all 12 residents of Mount Olympus are crammed into a London townhouse. When forced to earn a living as they attempt to ensure the survival of humankind, all have to secure employment. Dionysus, the god of wine, song, theater, vegetation, pleasure, festivity, madness and wild frenzy, becomes, aptly enough, a DJ).

This latest Dionysian comeback is to suburban New Jersey, where the Real Housewives are ripe for seduction and the restoration of the earth to its natural state. That task includes doing away with lawns and curbs, replacing them with milkvetch, bladderwort and bulbous-fruited pawpaw trees.

Dionysus (also known as Bacchus) requires, we’re told, a unit to accomplish anything: a minimum cohort of four to become Bacchae, the god’s animalistic, oversexed minions.

Three of the four chosen ones on a Monmouth County cul de sac are willingly seduced. The holdout refuses to compromise in any way. She hates the untamed vegetation, longing only for a wrought iron accent bench in her backyard, and will accept nothing else. This puts a crimp in Diane’s style, plans and takeover.

Director James Vasquez had teased strong performances from his cast, but there isn’t as much as one might hope to work with.

Rami Margron (they/them) is superb, and wonderfully coiffed and attired as Diane, but the other characters are paper-thin, uni-dimensional stereotypes that only a laugh-track could love.

These so-called friends, who meet regularly for Zinfandel or mimosas and call themselves “The Girls” (Diane calls them out on that; aren’t they women?) can turn on a dime into backbiting bitches.

As has always been true of most of the gods, Diane is governed by ego and vanity, not to mention a misguided (and salacious) approach to humans. Plus, as a demigod (child of Zeus and the mortal, Semele), she doesn’t have all that much power. So when an apocalyptic storm comes on the heels of Hurricane Sandy, there isn’t much she can do. In the end, this story makes no bones about the fact that we’re doomed.

That’s the dark layer beneath the superficial bulk of the piece. But it’s too little to support the final moralizing, cautionary moments. The songs don’t contribute much, either.

Hard to believe this is the same Madeleine George who was a 2014 finalist for the Pulitzer Prize, for the provocative “The (curious case of the) Watson Intelligence,” which received a delightful and ingenious production at Moxie Theatre in 2015; and “Precious Little,” excellently presented by InnerMission Productions the same year.

The set (Jo Winiarski) is a glossy kitchen with a huge central island, one in a cluster of identical floorplans. The sound (Drew Levy), lighting (Cat Tate Starmer) and costumes (Shirley Pierson) enhance the proceedings.

Still, this is far from a bold play choice, or an effective one, in tackling a timely, and potentially terrifying, topic.