“SHE LOVES ME” at San Diego Musical Theatre 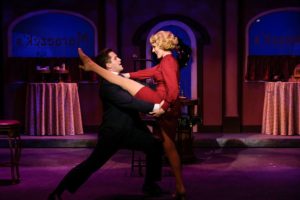 It’s a tale as old as time. Two disparate people, who clash constantly and think they hate each other, wind up realizing they actually love each other. All along, they’ve been secret admirers, though neither of them knows it.

The original plot came from a 1937 Hungarian play called “Parfumerie,” that in 1940, was adapted into the film, “The Shop Around the Corner.” The film morphed into the 1963 musical, “She Loves Me,” which returned to the original setting , a perfume shop in Budapest.

With a book by Joe Masteroff and music and lyrics by Jerry Bock and Sheldon Harnick, who created “Fiddler on the Roof,” you can be sure that the score is superb, with unpredictable melodies and clever, often funny, lyrics. The demands of the music require strong, nearly operatic voices.

On all counts, San Diego Musical Theatre delivers in spades — and hearts.

The principal characters are sharply etched and expertly played. The other employees at the shop are classic types, but they each get compelling and amusing characterizations: the hapless sexpot, the nebbishy Nice Guy, the smarmy Lady’s Man, the demanding but well-intentioned boss. There’s also an ensemble of shoppers, lovers and dancers. All outstanding.

At the center are Georg and Amalia, played with beguiling artistry and humor by New York-based, San Diego-born Joshua David Cavanaugh and local favorite, golden-voiced Allison Spratt Pearce. They’re delectable, separately and together.

The 13-piece orchestra, with prominent, romantic strings, is under the assured direction of Don LeMaster.

This is a 1930s period piece, and it has the feel of a comic opera. But the discovery of love in the least expected place never goes out of style.

Once you get a whiff of this charming parfumerie and meet its delightful denizens, you’ll be intoxicated and entranced.