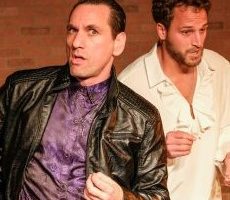 February is ostensibly (at least according to Hallmark) the month of love.

If you want to do something differently romantic for Valentine’s Day, you might want to catch “Italian American Reconciliation” at Scripps Ranch Theatre, which only runs through February 16.

When the one-act premiered in 1988, it was subtitled “A Folk Tale,” which gives leeway when things don’t always quite hang together in a realistic manner.

In the theater world, John Patrick Shanley is best known for his Pulitzer Prize-winning play, “Doubt”: A Parable (2004).

“Italian American Reconciliation” is an early Shanley work, written shortly after his breakout film success with “Moonstruck” (1987), which was nominated for an Academy Award for Best Original Screenplay. Like the movie, the stage play is all about love — how hard it is to obtain and to keep, and how it seems to make everyone crazy.

One thematic through-line is that ultimately, love is worth fighting for. Those ‘fights’ result in the need for reconciliation, and there are several of them going on here.

Huey Maximilian Bonfigliano (Marco Kengott), who’s still pining three years after his divorce, despite being in a relationship with the far more sane and stable Teresa (Gina Maria Cioffi), wants to get back with his ex, Janice (Lynnia Shanley).

His best bud, Aldo Scalicki (John DeCarlo), narrator (“I’m here tonight to teach you something”), audience kibitzer and confirmed bachelor, steps in to help; he agrees to go ‘soften’ Janice up before Huey arrives

A balcony scene ensues (you may think “Romeo and Juliet” or “Cyrano de Bergerac,” but really, there’s no comparison… except the balcony itself, cleverly designed).

Before he can go through with his not-so-loyal plans, Aldo has to reconcile with Janice, since she’s been abusive to him since their early school days.

Janice has a volatile personality, and a penchant for cruelty and violence; she killed Huey’s dog (just to get her husband’s attention) then took potshots at him, too. She attacks Aldo in the same way.

The ultimate reconciliation is Aldo with himself. He needs to untie his Mama’s apron strings, grow up,  and get past his fear of women and marriage.

All this makes the play sound deeper and more profound than it is. It’s really a trifle; hard to believe it’s by the same playwright who, 20 years later, gave us the provocative “Doubt.”

One of the pieces of advice and ‘wisdom’ dispensed about love by Aunt May (Rhiannon McAfee) is “Be open to it.” If you are, you might find a helpful nugget or two to apply to your own romantic pursuits.

Basically, what we have here are regular, average, flawed folks. Well, the trigger-happy Janice is a bit extreme, but that’s explained away by the fact that she, like Aldo, grew up with a distant, unloving father. (Freud was more popular in the 1980s than he is today. Even Oedipus gets more than one mention).

Director Charles Peters keeps the pace lively, but nothing in this production feels believably New York or Little Italy. The accents come and go, and everyone tends to veer over the emotional line into the realm of histrionics. There’s a great deal of yelling.

DeCarlo, typically a compelling actor, is at a feverish pitch almost throughout. His quiet, introspective moments feel more real than his lounge-lizard, macho-italiano act.

As the hangdog poet, Huey, Kengott provides low-key ballast. Cioffi is adorable, McAfee does the best she can with a thankless role, and Shanley is credibly creepy (and lovely) as Janice.

The set (Peters), lighting (Kevin “Blax” Burroughs, who seems to be everywhere, in various capacities, these days); and sound (Steven Murdock) are serviceable, if pedestrian. The costumes (Pamela Stompoly-Ericson) are amusingly character-defining. (Aldo’s pointy-toed shoes are what we native-born New Yorkers used to call “corner roach-killers”).

Some have dubbed this play ‘operatic.’ That’s a stretch, though there is some blue-collar lyricism, and a few comic zingers fly by.

Keeping an open mind (and heart), you might be able to reconcile yourself to a little V-Day rom-com frippery.