“THE GREAT LEAP” at Cygnet Theatre 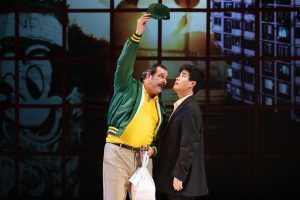 Manford Lum has hoop dreams. The high-energy, 5’5” high schooler just wants to play point-guard for the University of San Francisco.

“The Great Leap,” one of the most produced plays in the country last year, has a title with multiple meanings. It’s a big step for Manford to insinuate himself onto the team that’s about to embark on an exhibition game in Beijing. And, for a short guy who can shoot 99 free throws in a row, every shot is a great leap. The name also refers to China’s mid-20th-century program of economic reform that led to millions of deaths.

Multi-award-winning playwright Lauren Yee, an alumna of UC San Diego, was inspired by her father, a passionate basketball player in San Francisco’s Chinatown.

At Cygnet Theatre, associate artistic director Rob Lutfy, who directs “The Great Leap,” regularly played basketball with his father in his youth.

So they’ve both got game, and they both score big.

The Cygnet production is superb. The play has the rhythm and pacing of a basketball game, and Lutfy keeps his actors on the move, passing the ball to each other — sometimes literally — and staying light on their feet.

Yi-Chien Lee’s outstanding set, a basketball court represented above and below, is backed by archival projections of the real-world incidents described.

In 1971, the cocky, trash-talking USF coach said a Chinese team would never beat an American team. Eighteen years later, in 1989, the Chinese are ready for a grudge-match. What the Bronx-born coach doesn’t know is that China has long been gaga for basketball, and their players are 7 feet tall.

The performances are terrific: Manny Fernandes and Edward Chen as the comically contrasting coaches; Scott Keiji Takeda as Manford; and Keiko Green, who originated the role, as his quasi-guardian. The lighting and sound lend potent support.

In this delightfully funny and thrillingly unpredictable play, geopolitics meets family secrets — the big picture personalized and humanized by the small one.

There’s a message embedded, about those who play and those who observe. It’s not about waiting for your turn. As the brash American coach says of the game, it’s always your turn.

So which team are you on?