“THE HUMANS” at the San Diego Repertory Theatre 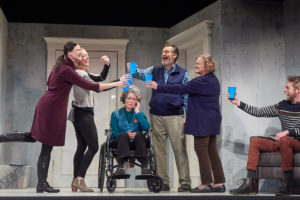 In a fictional comic book called Quasar, the zombies tell horror stories. To these monsters, the humans are the monsters.

It’s Thanksgiving, and the Blake family has come together to celebrate in daughter Brigid’s creepy, crumbling, part-subterranean duplex in New York’s Chinatown, where she and her boyfriend, Rich, have just started living together.

The place is dark above and below, there are few windows, a narrow spiral staircase separates the floors, and the lights keep going out unexpectedly.

Then there are the spooky noises — hackle-raising banging, thumping, pounding, rattling. Objects come crashing to the floor with no provocation.

The family inside is exposing plenty, too.

In a setup that’s a little too contrived, each person gradually reveals a crisis. Two have lost their jobs, and the grandmother, Momo, has lost her mind to dementia; her son and daughter-in-law can’t afford someone to care for her. One Blake daughter can’t find employment in her chosen career as a composer; her sister is being pushed out of her law office. The younger generation is saddled with student loan debt. The older sister has a debilitating medical condition (ulcerative colitis, which has caused many absences from work); she’s also suffering from a gut-wrenching lesbian breakup. The parents have had to sell their house as the result of a major personal disaster they’ve yet to disclose to their children.

And, oh yes, the older daughter and her father were right there when the Twin Towers collapsed on September 11; they couldn’t find each other for hours. He’s still haunted by that, and reminded of his grandmother, who died in the shirtwaist factory fire of 1911.

Dad is having creepy nightmares. So is Rich, who has suffered from depression, he admits, in his past.

That’s a whole lotta issues packed into one 90-minute play.

But this family is a stand-in for the entire American middle class and its daily dreads.

Mom and Dad are kind of blue collar. Their children are striving to be middle-middle class and beyond (entitled Brigid refused to go to a State school, and still wants her Dad to pay for her therapy). Rich, a soon-to-be-trust-fund baby, grew up in what sounds like the upper middle class. He’s also supposed to be considerably older than Brigid, but he doesn’t look it.

Beyond all the undertones, intimations and Big Themes, this is a family holiday gathering, and we all know what that means.

Not all the revelations are received by family members with sympathy and equanimity. There’s a great deal of (sometimes rather nasty) needling, and passive aggressive undermining.

It’s clear that there’s love and bonding here, but there are long-term conflicts and resentments roiling barely beneath the surface, and various cracks and breakdowns in relationships are exposed.

Still, it’s a holiday, and the rest of the family has driven from Pennsylvania through the snow to see (and disparage) Brigid and Rich’s new place.

So there’s lots of drinking, as well as other fun family traditions (Irish songs and prayers) and fond memories, though Mom can’t stop herself from regaling her daughters with the latest diseases and disasters affecting friends and relatives. She also pushes them to return to the faith she clings to. Dad calls religion a “natural anti-depressant.” Mom has brought a Virgin Mary stature as a house-gift for her non-believing offspring and mate.

Did I mention that everyone talks at once? The dialogue is crisp, crackling and genuine, even if the panoply of problems strains credulity.

Death rears its head in various guises. Even Momo, in her unnervingly repetitive mumblings and ramblings, comes through with a few existential questions: “Where do we go?,” “Why am I here?”

These are not particularly likable people, though they’re well drawn and familiar, and at San Diego Repertory Theatre, extremely well enacted.

Our interest is sustained by the suspense and sense of dread built by the mysterious sounds and occurrences (which are never fully explained). There’s symbolism in the final moments, but not resolution. These folks are seriously anxious, overwhelmed by the crushing pressures of their lives.

Presumably, they will all just keep stumbling and bumbling on.

The play, which won four Tony Awards in 2016 (including Best Play) and was, surprisingly to me, a finalist for the Pulitzer Prize (it was bested by “Hamilton”), is not wholly dramatically satisfying.

But the Rep production is outstanding. The cast is spectacular, under the sensitive, nuanced direction of Todd Salovey.

Rosina Reynolds has, perhaps, the most challenging role, as Momo, mute at times, slumped in a wheelchair. Occasionally, you kind of get what she’s getting at, especially when she turns on her son, the cause of a good deal of the family’s emotional mayhem, and spews, “You did this!”

Jeffrey Meek and Elizabeth Dennehy are splendid as the parents, mired in their own personal horrors, overprotective of their grown children while reproaching them for their life choices.

As their daughters, both adrift and not particularly hopeful about their future prospects, Amanda Sitton (Aimee) and Kate Rose Reynolds (Brigid) are marvelous. They’re especially good when they’re together being sisterly.

As Rich, the outsider trying to get in, Brian Mackey struggles to figure out the relationships and conflicts, and as a social work student, offers not-always-welcome advice and dream interpretation. We get the feeling that his family operates a bit differently than the Blakes. He says his clan’s Thanksgiving is “sponsored by Klonopin,” an anti-anxiety drug used to treat panic attacks.

Besides the hyper-realistic, humdrum fly-on-the-wall voyeurism, it’s hard to determine the intended takeaway here, especially since all that realism is juxtaposed with a supernatural element.

But there will doubtless be some recognizable family dynamics that just about anyone can relate to. In the end, we’re all human.