“THE HUMANS” at The Ahmanson Theatre, L.A. 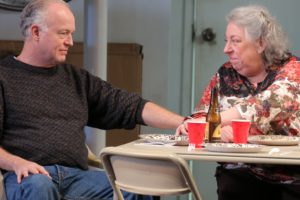 The ghost of Willy Loman hovers over “The Humans,” the Tony Award-winning Best Play of 2016, now running at the Ahmanson Theatre in L.A.

Arthur Miller’s “Death of a Salesman” bemoaned the demise of The American Dream. But nearly 70 years later, we still cling to that notion of just deserts, of getting what you’ve hoped and strived for. Work hard and you’ll be rewarded. It’s the American credo.

As this brief and deeply real comic drama shows, the disappointment and disenchantment still burn bright—along with the dread of what loss may come next. This is the Middle American nightmare of today.

The Blakes are an upright, blue-collar family from Scranton, Pennsylvania. Three generations have come together to share Thanksgiving dinner in the drab and still empty just-acquired New York duplex apartment of the youngest daughter and her boyfriend. There’s little light in the place—and perhaps in the future for these folks.

Although losses of many kinds course through the play, we don’t see the biting brutality of other dramatic families seated around a table, like those in Tracey Letts’ 2007 Pulitzer Prize winner, “August: Osage County,” where the family gathering devolves into acidic cruelty as secrets are revealed. (“The Humans” was a finalist for the Pulitzer, but it was edged out by a little production called “Hamilton”).

In contrast to other, more cruel kin, this is, first and last, a loving family. They sing Irish songs, as one of their holiday traditions. The bonds are strong; compassion and forgiveness override each member’s errors, wrong turns and failures. And failures unwind here like a tangled ball of twine.

Each person has suffered a profound personal loss.

Oldest daughter and attorney Aimee (staunch, grounded but barely-holding-it-together Cassie Beck), has a triple whammy: she’s been dumped by her girlfriend, passed over for partner at her firm, and her health has succumbed to a severe case of ulcerative colitis.

Her younger sister, Brigid, the harried hostess (excellent Sarah Steele), has lost all prospects of a career as a composer. Her boyfriend, Richard (Nick Mills) is struggling to maintain his mental health.

In the case of the Blake parents (magnificent Reed Birney as Erik and Jayne Houdyshell as Deirdre, both Tony Award winners for their stellar performances), a dark secret threatens their bond of marriage and their financial survival. They’re now sheltering and caring for Erik’s mother, Momo (wonderful Lauren Klein, in a very challenging role), who’s losing her mind, as she descends into the depths of dementia.

Momo babbles incomprehensibly at times. But, unlike the buttoned-up others, she’s the only one who can vent her roiling rage and frustration, howling wildly in an anguished fit.

Metaphorically, all these folks are haunted by the turn their lives have taken. By the end, the haunting is made manifest, and it’s kind of eerie, sinister and not quite of a piece with the rest of the drama. Playwright Stephen Karam has said his aim was to create a family thriller. Not sure that notion was a total success, since the creepy part only surfaces in the play’s final moments.

But the fear factor goes far beyond the things that go bump in the apartment, day or night. There are strange, banging, thumping noises from above. No sense trying to complain to the upstairs neighbor; she doesn’t even speak English (she’s Chinese; Brigid and Rich’s apartment is large and affordable because it’s in Chinatown).

This is the torment of middle class white America. Nothing has turned out to be how they thought it would be. And the future looks anything but bright.

Deirdre chides and complains—and flings comic zingers—but she hovers over her beloved daughters, admonishes Brigid about the need to get married, and crumples when they ridicule her behind her back. But she, at least, can depend on her faith (she’s brought a Virgin Mary as a house gift, knowing that both Brigid and Rich are non-believers). The others are much more at sea, at the whim of the winds of change (or stasis).

Aimee was minutes away from being trapped atop the Twin Towers on September 11, 2001. Her father still has horrid nightmares about that. Rich, a former depressive, now a social work graduate student who will soon become a trust-fund baby, reports a few weird dreams of his own. Having taken two psych courses, he feels free to counsel Erik to go through the tunnel he dreams about. “Passing through can be a favorable omen,” he says. And Erik does ultimately get something of that real-life opportunity (that’s where the spooky part comes in).

The most potent part of this rhapsodically reviewed play is how real and recognizable these people and their pressures and problems are. Dramatically speaking, the ensemble work is nonpareil.

Rarely do we get a chance to experience the original Broadway cast and production on this coast (the play ran for over a year in New York). All but one of the team that created these characters is currently at the Ahmanson (Mills was not the original Richard, but he did play the role on and Off Broadway). And the entire original design is intact: the bi-level, Tony Award-winning set (David Zinn), where pots fall, lights fail and doors close of their own volition; the marvelous lighting (Justin Townsend) and sound (Fitz Patton), and the sharp, taut direction of two-time Tony winner Joe Mantello.

The performances are uniformly outstanding—natural, compelling, amusing and heartbreaking. The Blakes may represent the American working class, but their existential horrors afflict us all: death, poverty, ill health, waning mental capacity and loss of love. You have to look beyond the small family adversities to see the bigger picture of 21st century American anxiety.