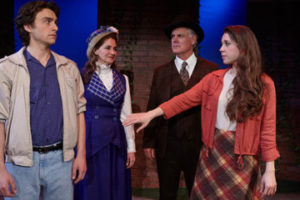 For Caithleen, time is a chord: many notes appearing at the same time — past, present and future — all real, all alive, and all played at once.

An adorable 20-year-old tour guide in Dublin, she’s re-tracing the route Leopold Bloom took through the city, as described by James Joyce in his 1922 magnum opus, “Ulysses.” The day of that fictional walk is celebrated and enacted in Dublin every year — on June 14, Bloomsday.

This year, one of Caithleen’s tour groups has only 12 people. Including her, that would make 13, and she can’t have that. So she convinces Robbie, a young American tourist, to join the group. She and he are instantly, mutually, smitten, but the attraction doesn’t play out as expected, thanks to that time-shifting thing of hers.

Thirty-five years later, middle-aged Robert has returned to seek out Caithleen and right the wrongs.

In Steven Dietz’s enchanting, intriguing 2015 play, “Bloomsday,” as in Joyce’s novel, time is mysterious and mercurial. We meet young and old Caithleen and Robert, and they even confront their older or younger selves, to consider what might have been done differently.

The play is thought-provoking and unpredictable. And it’s getting an outstanding production at North Coast Repertory Theatre, with lovely lighting, subtle projections and superb performances.

Hunter Saling is convincingly but maddeningly hesitant as young Robbie, while the older Robert, though disparaging of Joyce’s 10-pound doorstop epic, has been teaching the tome for 20 years, still maintaining hope that he can re-capture and re-frame the past.

The underlying message is Carpe Diem. Take the hint and be sure to make the time for this sublimely realized, magical creation.